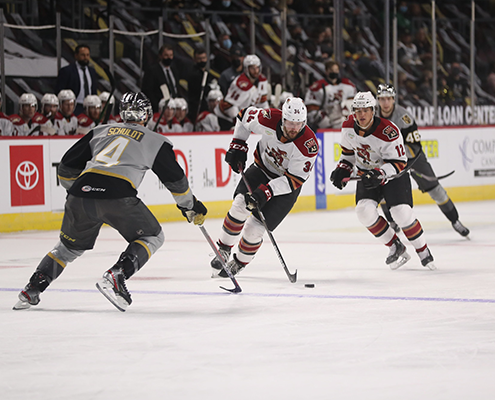 Las Vegas, Nevada – The Tucson Roadrunners battled back from an early 2-0 deficit, but the Henderson Silver Knights ultimately came away with the win Saturday night at the Orleans Arena in Las Vegas. Roadrunners forward Tyler Steenbergen extended his point streak to five games, while goaltender Ivan Prosvetov returned to the lineup for his first action with the Roadrunners since March 21.

The Roadrunners and Silver Knights took turns applying pressure on the opposing goaltender throughout the first period, but Henderson wound up getting on the board first in with 3:14 to go in the frame. Tucson went on three power-plays throughout the period and avoided going to the box themselves. After twenty minutes, the Silver Knights were up with a 1-0 lead. Paul Cotter had the goal for Henderson, his fifth of the season. Shots on goal were even at 15 apiece in the first period, but Tucson pulled away in the second period with 16 shots on goal compared to Henderson’s 10. Henderson extended their lead to two when they cashed in on their first power-play of the night 6:15 into the middle frame, the goal scored by Gage Quinney, his tenth of the year. The goal snapped the Roadrunners streak of going a perfect 36 for their previous 36 attempts on the penalty-kill in away games. The Roadrunners answered back three and a half minutes later, getting on the board thanks to a goal by Tyler Steenbergen, assisted by Jeremy Gregoire. Steenbergen extended his point streak to five games with the score, matching Lane Pederson and Michael Bunting for the team season high. The Silver Knights went on the power-play once again with 2:10 to go in the period, but it was the Roadrunners that ended up scoring this time. Nate Sucese buried the puck in the back of the net for his second shorthanded goal of the season, putting the Roadrunners even with the Silver Knights at two goals apiece heading into the final twenty minutes of regulation. The teams traded penalties, ultimately playing a minute and a half of 4-on-4 hockey. Shortly after the special-teams situations ended, the Silver Knights retook their lead off a breakaway, putting the score at 3-2 midway through the third period. Henderson extended their lead with less than five minutes left to play in the third period, putting the score at 4-2. With one second left on the clock, Michael Carcone beat the buzzer to earn his eleventh goal on the season, making the final score 4-3. With the victory, the Silver Knights became the first team in the 2021 AHL campaign to reach 20 wins.

The Roadrunners wrap up their one-stop road trip and season series with the Henderson Silver Knights Sunday evening at 5:00 p.m. MST. You can listen to the game in Tucson on FOX Sports 1450 AM and on the iHeart Radio app or watch the game on AHL TV.

“That one stings, our guys worked so hard to battle back; they dug in and found a way to bring it back to 2-2 after a 2-0 start. It’s really unfortunate that a turnover ended up in the back of our net.”

Tucson Roadrunners Head Coach Steve Potvin after the game described the tough loss in which Tucson back from an early 2-0 deficit.

DON’T OVERLOOK IT
SHORTHANDED SHARPSHOOTER – Roadrunners rookie forward Nate Sucese netted his second shorthanded goal of the season in Saturday night’s clash with the Henderson Silver Knights. Sucese’s goal tied the game at two with 27 seconds left in the second period. Sucese and teammate Tyler Steenbergen both scored their fifth goal of the season during the second period of Saturday’s contest, and coincidentally are the two Roadrunners with a shorthanded tally this year.

Watch Tucson forward Tyler Steenbergen get the Roadrunners on the board midway through the second period Saturday night with his fourth goal of the season against the Silver Knights. Steenbergen extended his point streak to five games with the score, matching a season high set by Michael Bunting and Lane Pederson back in February.

Goaltender Ivan Prosvetov donned a Roadrunners uniform for the first time since March 21 Saturday night in Las Vegas when he started in net against the Henderson Silver Knights. Prosvetov made 26 saves for the Roadrunners less than a week after making his first career NHL start for the Arizona Coyotes against the Colorado Avalanche.