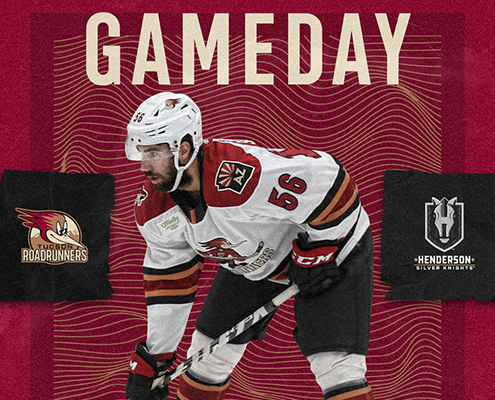 The Tucson Roadrunners conclude their season series with the Henderson Silver Knights Sunday evening at the Orleans Arena in Las Vegas. Tucson came back from an early 2-0 deficit against the Silver Knights Saturday night, but Henderson retook the lead and came away with a 4-3 win, becoming the first team in the AHL to reach 20 wins this season.

Three Things
1) Roadrunners forward Tyler Steenbergen extended his point streak to five games Saturday night against the Henderson Silver Knights, matching the team season high set by Lane Pederson and Michael Bunting back in February. In the last five games, Steenbergen has four goals and two assists, with all four goals coming against the Henderson Silver Knights. The current streak sets a new career high for Steenbergen, which was previously a four-game stretch from his 2018-19 rookie campaign. With the recent surge of scoring, Steenbergen is now tied for fifth on the team for goals with Nate Sucese, who also scored during the second period Saturday against Henderson.

2) Tucson Roadrunners goaltender Ivan Prosvetov returned to the lineup Saturday night, making his first start for the Roadrunners since March 21. Prosvetov made 26 saves in his first AHL road game since February 26 in Colorado. Prosvetov made his first career NHL start less than a week ago in Colorado, when the Arizona Coyotes took on the first-place Colorado Avalanche on April 12. He appeared in three games for the Coyotes after being brought up from the Roadrunners March 22, stopping 51 shots. Prosvetov is no stranger to the city of Las Vegas, as he was on the Coyotes roster for both of their games against the Vegas Golden Knights, appearing in their game on April 2 and backing up his regular Roadrunners teammate Adin Hill on April 4, while the Coyotes embarked on a nine-game road trip.

3) The Roadrunners newest defenseman Ty Emberson made his AHL debut Saturday night against the Henderson Silver Knights in Las Vegas. Emberson signed a three-year entry level contract with the Arizona Coyotes last week, after serving as captain this past season at the University of Wisconsin. In his three years on the school’s hockey team, the 20-year-old put up 34 points, and an overall +11 rating. Emberson was drafted by the Coyotes in the third round of the 2018 NHL Draft, and joins fellow 2018 draft class members Barrett Hayton, Jan Jenik, Ivan Prosvetov and David Tendeck in Tucson.

“[Jeremy’s] obviously a great player and he’s made some good plays for me. We’ve been clicking lately and hopefully we can keep that going moving forward.”

Number to Know
1 – The number of seconds left on the clock when Michael Carcone scored his team-leading eleventh goal Saturday night against the Henderson Silver Knights in Las Vegas. The reigning AHL Player of the Week now has seven goals in his last four games and is tied for tenth in the AHL for goals. Carcone became the second Roadrunner to earn Player of the Week honors when he scored six goals in two games against the San Diego Gulls last weekend. Thanks to Michael Carcone and similarly named Michael Bunting, the Roadrunners are the only team this season with multiple Player of the Week winners.

We’re Doing It Live
Roadrunners Hockey returns to the radio today at 5:00 p.m. as “Voice of the Roadrunners” Adrian Denny brings you all of the action on Fox Sports 1450 AM. All Roadrunners games are broadcast live on Tucson’s Sports Station, along with AHLtv.