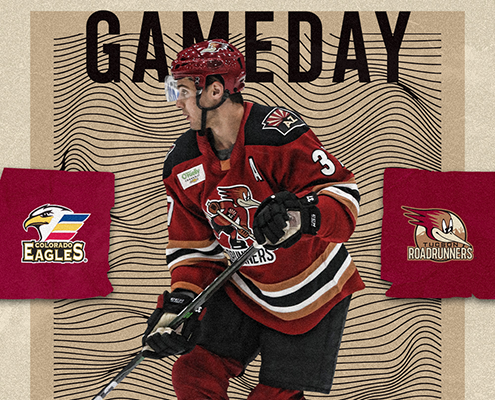 The Tucson Roadrunners welcome the Colorado Eagles to Southern Arizona for the first time this season Thursday night, kicking off a three-game series to wrap up play between these two teams on the season. Tucson is back in town after a three-game road series with the Henderson Silver Knights, where they took three of the possible six points against the first-place Silver Knights in Las Vegas, becoming the first team to do so this season.

Three Things
1) Fresh off a win in their last game against the Silver Knights, Tucson will be looking to get a winning streak started against the Colorado Eagles this weekend at the Tucson Arena. There is one other notable streak looking to be extended this weekend that belongs to Roadrunners forward Tyler Steenbergen. Steenbergen is currently on a six-game point streak dating back to April 3. His five goals scored in the month of April is second-most on the team, only behind Michael Carcone, whose six-goal series with the San Diego earned him AHL Player of the Week honors earlier in the month. Two of Steenbergen’s goals proved to be game winners against the Silver Knights, first on April 3, then again on April 18.

2) The Colorado Eagles come to Tucson this weekend for the first time since February 1, 2020. The Eagles enter the series with a 6-3-0-1 record in their last ten contests. They play clean, having a division-fewest 209 penalty minutes. They are 2-0-1-0 against the Roadrunners this season, after a hard-fought series in Loveland, Colorado at the end of February. In that series, Kevin Roy slipped through the Eagles 3-on-3 overtime defense to net the game-winner on February 26. Colorado is fresh off a six-game homestand, where they took three out of four games against the Texas Stars, and split a pair of games with the Bakersfield Condors.

3) A familiar face returned to the Roadrunners roster for the final two games last weekend against Henderson, as Ivan Prosvetov was assigned to Tucson by the Arizona Coyotes last Friday. Ivan started back-to-back games against the Silver Knights Saturday and Sunday, making a combined 53 saves and earning a win on Sunday. Prior to Sunday’s victory, Prosvetov’s last win was against the Colorado Eagles, when he made 35 saves in a 4-3 overtime victory in Colorado. Ivan appeared in three games with the Arizona Coyotes this season prior to rejoining the Roadrunners, even making his first career NHL start against the Colorado Avalanche, the NHL affiliate of the Eagles.

“The way they communicate… They know the game very well; they’ve played for a long time. [Slaney] is a very visual guy, he’ll do video with you and he’ll point out things where you’re struggling or where you’re doing well and help you dial in your game that way. [Potvin] is probably one of the best motivators I’ve had. He’s always positive when he needs to be and he’s a great communicator.”

Number to Know
7 – The number of different Roadrunners players to record a point in Sunday’s 3-2 win over the Henderson Silver Knights. Frederik Gauthier led the team with a goal and an assist, becoming the fifteenth Roadrunner this season to record a multiple-point performance. Kevin Roy leads the team with seven multi-point games this season, including a two-goal night against the Colorado Eagles back in February. Five Roadrunners have had a multi-goal performance this season, led by Michael Carcone with three.