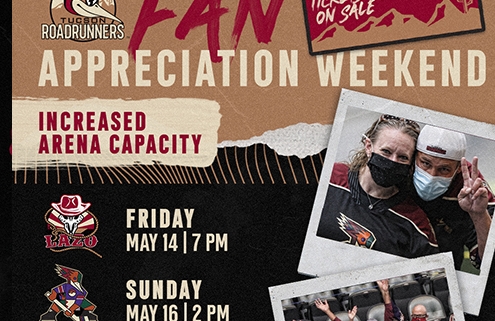 Tucson, Arizona – The Tucson Roadrunners, owned and operated by the Arizona Coyotes have announced that social distanced arena capacity at Tucson Arena will increase to 1,550 fans for Fan Appreciation Weekend games on Friday, May 14 at 7 p.m. and Sunday, May 16 at 2 p.m.

1,550 fans, or approximately 25-percent of the Tucson Arena, will be welcomed for the final two regular season games following approval from the Pima County Health Department and in partnership with the City of Tucson and Tucson Arena.

The Roadrunners successfully welcomed in 650 fans for March games and 1,150 fans for April games and health and safety of all in the arena continues to be the top priority.

“While strictly following all local guidelines in the return of fans to cheer on the Roadrunners, we feel that we have also been successful in bringing a first-class live entertainment experience back to Tucson Arena at the same time,” said Roadrunners President Bob Hoffman.

Available tickets for games on games on Friday, May 14 and Sunday, May 16 will go on sale Friday at 12 p.m. at TucsonRoadrunners.com/WelcomeBack.

Fans will still be required to wear face coverings at all times in the arena unless actively eating or drinking.

The Roadrunners host Colorado this week on: Thursday at 6:30 p.m., Friday at 7 p.m. and Sunday at 1 p.m. with an arena capacity of 1,150. Tickets are available at TucsonRoadrunners.com/WelcomeBack.