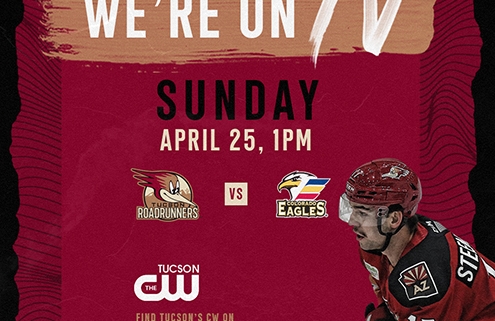 Sunday’s broadcast will be the fifth of six telecasts on The CW Tucson this season as “Voice of the Roadrunners” Adrian Denny will call the game with Alex Kinkopf from ArizonaCoyotes.com. Like all TV broadcasts, the contest will be simulcast on Tucson’s Sports Station Fox Sports 1450 AM and be produced by FLOODstream.

**Please note the game time of 1 p.m. for Sunday, April 25. The original schedule released in January had a different start time.

“We have been very excited with the popularity of our first season of television broadcasts on The CW Tucson and are looking forward to sharing another game of Roadrunners hockey with Southern Arizona this Sunday,” said Roadrunners President Bob Hoffman.

Tucson also hosts Colorado Thursday at 6:30 p.m. and Friday at 7 p.m. for the team’s next El Lazo De Tucson night. A limited number of social distanced seating is available for all three games at TucsonRoadrunners.com/WelcomeBack.

About the Announcers
Adrian Denny is in his third season as the “Voice of the Roadrunners” and his 16th season providing play-by-play in professional hockey. This marks his seventh season broadcasting games on television and also doubling as the Executive Producer.

Alex Kinkopf is in his second year covering the Coyotes for ArizonaCoyotes.com as the team’s Manager, Digital Media/Content. He previously spent three seasons in Tucson as Manager of Digital Operations where he also contributed to the Roadrunners radio broadcasts and co-hosted the Roadrunners Insider Podcast on the iHeart Radio app.