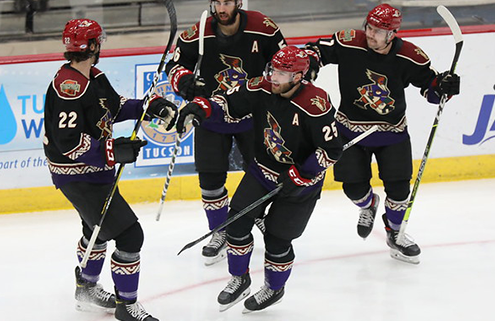 Who’s on the Schedule
The Tucson Roadrunners will play their final three games of the season with the Colorado Eagles this week at the Tucson Convention Center. The first game of the series is set for Thursday, April 22 at 6:30 p.m. MST. The Roadrunners haven’t faced the Eagles since February 27 in Colorado. Entering the week, the Eagles narrowly lead the season series two games to one. Colorado is at an even 71 goals scored, and 71 goals allowed, with the fewest penalty minutes of any team in the AHL Pacific Division.

Ivan Makes His Return
Goaltender Ivan Prosvetov returned to the Tucson roster this weekend, putting on a Roadrunners uniform for the first time since March 21. Ivan was assigned to Tucson from the Arizona Coyotes Friday and started in net both Saturday and Sunday against the Silver Knights. Prosvetov helped the Roadrunners to a win Sunday evening, stopping 27 shots, including allowing no goals during Henderson’s three power-plays, or during the extra attacker situation to end the game.

Another Goalie Joins the Roster
Only hours before Ivan Prosvetov was assigned to Tucson by the Arizona Coyotes, goaltender David Tendeck was added to the Roadrunners roster as well. Tendeck, who has yet to appear in a game above the ECHL level, was practicing with the Coyotes Taxi Squad up in Glendale. The 21-year-old out of Vancouver, BC is a member of the same 2018 Coyotes draft class as fellow backstop Ivan Prosvetov, along with skaters Barrett Hayton, Jan Jenik and Ty Emberson. The Roadrunners active goaltender list has now doubled since they went on the road last Thursday, as Prosvetov and Tendeck join Chris Nell and Connor LaCouvee.

Emberson Emerges in Tucson
Speaking of Ty Emberson, the 20-year-old fresh out of the University of Wisconsin made his professional debut with the Tucson Roadrunners Saturday night in Las Vegas. Emberson, a native of Eau Claire, Wisconsin, led all defensemen in points for his home state school this season while serving as captain in his junior season with the team. Emberson appeared in Saturday’s game alongside other members of the aforementioned 2018 Arizona Coyotes draft class Jan Jenik and Ivan Prosvetov.

Did You Know?
The Tucson Roadrunners were able to accomplish something in Las Vegas this weekend that no other AHL team has been able to do this season: come away with at least half of the standings points against the Henderson Silver Knights. Tucson became the first team to earn three standings points in as many games at the Orleans Arena, with an overtime defeat Thursday, followed by a crucial 3-2 victory on Sunday. The first-place Silver Knights had previously never surrendered more than two points during a homestand and won eight of their first nine games outright in Las Vegas. Tucson became only the second team this season to defeat Henderson more than once with their 3-2 win on Sunday.

Around the Pacific Division
While the Roadrunners return home to Tucson to take on the Colorado Eagles, the Henderson Silver Knights stay put in Vegas to host the Bakersfield Condors Tuesday and Thursday. Bakersfield is the only team besides Tucson to defeat the Silver Knights on multiple occasions this season and enter the series on a two-game winning streak. Meanwhile, the San Jose Barracuda will look to extend their three-game winning streak, as they host the San Diego Gulls for a pair of games before traveling south to Los Angeles to take on the Ontario Reign.