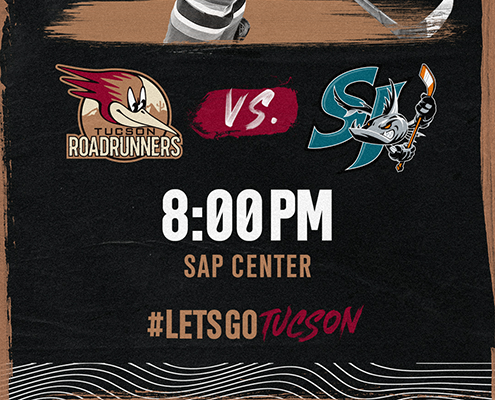 The Tucson Roadrunners are back at the SAP Center Friday night for a rematch with the San Jose Barracuda, after a 4-3 come-from-behind victory on Wednesday to begin the road trip. The Roadrunners first fell behind with just 4:12 gone by in the first period but scored a pair of goals 1:08 apart in the third period to take their first lead with 5:52 remaining in regulation. Tucson netminder Josef Korenar earned the victory in his first meeting against his former team, after spending the last three seasons as a member of the San Jose Sharks organization.

Three Things
1) After the Roadrunners started off the road trip with a 4-3 comeback win Wednesday night in San Jose, Tucson now has four road wins that have been decided by just one goal with a 4-1-1-0 record in one-goal games on the road overall. The Roadrunners possess a 3-1 record in the state of California so far this season, including a pair of overtime wins in Stockton and Ontario. Tucson has allowed a division-fewest 26 goals as the visiting team and continue the trip Friday night having won four of their last five games away from Tucson.

2) Tucson once again put on a special-teams clinic in Wednesday’s victory, as the Roadrunners were perfect on the penalty-kill for the fifth time in their last six games. Tucson also tacked on a pair of power-play goals by Jan Jenik and Blake Speers in the win, for a total of eight goals on the man advantage in the last six games. Jenik is tied with rookie forward Matias Maccelli for the team lead in power-play goals with four and has three in just his last five outings.

3) Wednesday’s game between the Roadrunners and Barracuda saw a pair of fights in the second period less than two minutes apart. It began with exactly five minutes gone by in the frame, when Tyson Empey dropped the gloves with Montana Onyebuchi for his fourth bout of the season. A minute and 55 seconds later, Blake Speers exchanged blows with San Jose’s Patrick Holway for his first fight of the 2021-2022 campaign. The Roadrunners have now had seven fights in their last five games, with seven different participants getting their hands dirty.

“Josef was very happy we could get that win in front of him [Wednesday]. He deserved it and he was here [with San Jose] so he was feeling good after the game.”

Number to Know
5 – The number of points scored by rookie forward Matias Maccelli in three games since returning to the Roadrunners lineup last weekend (2g 3a). The 21-year-old extended his active point streak to four games with a three-point outing against the San Jose Barracuda on Wednesday (1g 2a). Maccelli leads the team in all scoring categories (9-17-26), including a team-leading four power-play goals.

We’re Doing It Live
Tonight’s game will be broadcast on AHLtv, as well as on the radio on Fox Sports 1450AM, or on the iHeartRadio app. Coverage begins at 7:45 p.m. MST with Roadrunners Warm-Up, as Jimmy Peebles gets you ready for the game before “Voice of the Roadrunners” Adrian Denny has the call at 8:00 p.m. live from the SAP Center.