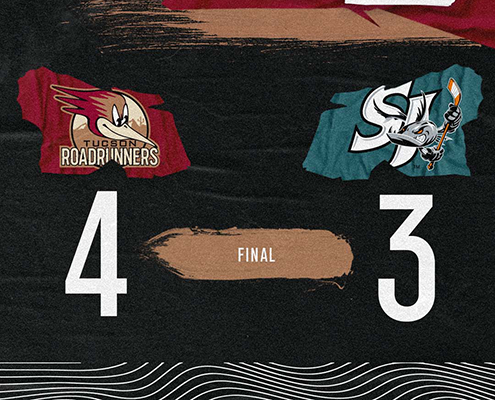 San Jose, California – The Tucson Roadrunners opened their two-week road trip against the San Jose Barracuda at the SAP Center Wednesday night. The Roadrunners rallied after trailing 2-1 midway through the third period to come away with a 4-3 comeback win against the AHL’s San Jose Sharks. Tucson goaltender Josef Korenar earned the win in his first meeting against his former team, as he stopped 20 shots on goal. Forwards Matias Maccelli and Boko Imama each extended their active point streaks to four games, as Maccelli had one goal and two assists.

The San Jose Barracuda took the first lead of the night with just 4:12 gone by in the opening frame with a second chance goal off a rebound by Zachary Gallant. Tucson’s special-teams got the Roadrunners back even when Jan Jenik tied up the contest on the team’s first power-play of the evening. The goal marked Jenik’s third goal while on the man advantage in his last five outings. San Jose retook the lead with just 27 seconds remaining in the first period, and the Roadrunners entered the first intermission trailing by a goal. Tucson forward Tyson Empey looked to regain the momentum for the Roadrunners with a fight in the early goings of the second period. The bout marked Empey’s fourth time dropping the gloves this season, and first since November 12 against the Ontario Reign. Another fight took place less than two minutes later, when forward Blake Speers took the gloves off for the first time this season against San Jose’s Patrick Holway. The rest of the second period came and went without a goal from either team, and the Roadrunners still trailed by one going into the final 20 minutes of regulation. After trailing for over 33 minutes, including the entire middle frame, the Roadrunners tied it back up with Matias Maccelli’s ninth tally of the season. The score wasn’t tied for long, as 1:08 later Maccelli set up linemate Cameron Hebig with a perfect pass in the offensive zone that gave Hebig his sixth score of the season and the Roadrunners their first lead of the night. Tucson tacked on an insurance goal a minute and a half later by Blake Speers with 1:23 remaining in regulation, making the score 4-2. Tucson wasn’t in the clear just yet, as San Jose pulled to within one goal with 22 seconds on the clock. With the extra attacker out on the ice for the Barracuda, the Roadrunners fended off a last-chance threat to come away with a 4-3 come-from-behind victory to kick off the road trip. The two points for Tucson was all the more rewarding after 24 hours of roster movement preceding the game, including several regulars who were not in the Roadrunners lineup. Defensemen Victor Soderstrom and Vlad Kolyachonok helped the Arizona Coyotes to a 2-1 win over the Toronto Maple Leafs back in Glendale, with Ivan Prosvetov backing up starting goaltender Karel Vejmelka. Logan Nelson, Max Coatta, and Quinn Wichers received the call-up from the ECHL’s Rapid City Rush and suited up for the win, along with backup goaltender David Tendeck. Tucson was also without regulars: Mike Carcone, Ben McCartney, Terry Broadhurst, Ryan McGregor, Liam Kirk, Doyle Somerby and Matt Foley.

The Roadrunners will be back at the SAP Center to face the San Jose Barracuda once again Friday night at 8 p.m. MST, with coverage beginning at 7:45 on Fox Sports 1450AM with Roadrunners Warm-Up hosted by Jimmy Peebles. Then, “Voice of the Roadrunners” Adrian Denny will have all the action live from the SAP Center.

“It shows what kind of character we have in that locker room. We have a lot of guys that want to win, and we know we’re going to be in a tight battle here down the stretch if we want to be a playoff team. Those are the games you have to win.”

Roadrunners forward Blake Speers on Tucson’s 4-3 comeback victory over the San Jose Barracuda Wednesday night at the SAP Center in California. Speers had the eventual game-winner with a power-play strike in the final 1:23 of the third period.

SPECIAL TEAMS STILL SHINES – The Roadrunners continued to rely on their special teams in Wednesday’s 4-3 comeback win over the San Jose Barracuda with two of their four goals coming while on the power-play. This included the eventual game-winner by Blake Speers with 1:23 remaining in regulation. Tucson was also a perfect four-for-four on the penalty-kill, shutting down the AHL Pacific Division’s best home power-play unit in the Barracuda.

Watch Tucson Roadrunners forward Cameron Hebig bury the setup pass from linemate Matias Maccelli to give the Roadrunners their first lead of the contest Wednesday night against the San Jose Barracuda. The goal marked Hebig’s sixth of the season, and the assist gave Maccelli his team-leading third point of the game.

Tucson Roadrunners defenseman Ty Emberson congratulates Roadrunners netminder Josef Korenar on the win in his first start against his former team, the San Jose Barracuda. Korenar stopped 20 of 23 shots on goal in the same building where he recorded a 12-4 record as a rookie back during the 2018-2019 campaign for the San Jose Sharks AHL affiliate.