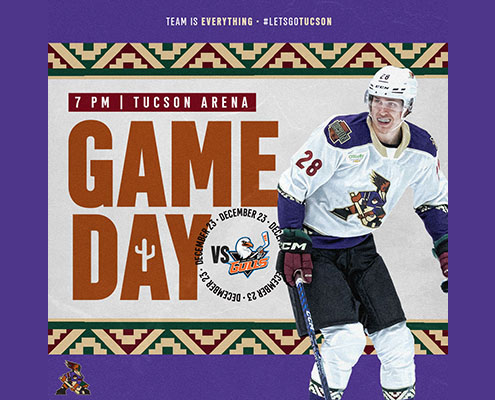 The 14-9-4-0 Tucson Roadrunners take on the San Diego Gulls Friday night at the Tucson Arena in their final home game of 2022. The contest with the AHL affiliate of the Anaheim Ducks wraps up a two-game series between I-8 Border Rivals that saw Tucson take the series opener Thursday night by a score of 6-2. Friday is also Festivus Night at the Tucson Arena to celebrate Festivus and the classic Seinfeld episode, “The Strike.” Scenes from the episode will be featured on the video board, and Mascot Dusty will even have his own Festivus Pole. For more information and to purchase tickets, click HERE.

Three Things
1) The Roadrunners grabbed a 1-0 lead with 11:39 gone by in Thursday’s series opener and never looked back as they cruised to a 6-2 win over the Gulls. The victory marked the third-straight multi-goal win over the Gulls to begin the season series, and fourth consecutive victory against San Diego at the Tucson Arena dating back to October 30, 2021. The Roadrunners have scored first in all three matchups with the Gulls this year while leading after each period of play. A win on Friday would guarantee at least a tie in the I-8 Border Cup Series for Tucson, as the Roadrunners and Gulls meet for eight total contests this year. Following Friday’s game, the next matchup between I-8 Border Rivals won’t be until Tuesday, February 14 at the Pechanga Arena in San Diego.

2) Tucson was able to spread around the scoring in Thursday’s 6-2 win, with 13 different Roadrunners tallying a point. In addition, five players finished the night with multiple points, including three of Tucson’s top-five scorers on the season: Mike Carcone (first), Laurent Dauphin (third) and Milos Kelemen (fifth). With a pair of assists on Thursday, Dauphin has four multi-point outings over his last six appearances and ten total points (4g 6a). Carcone’s two-point performance (1g 1a) extended his active point streak to four games, which is tied with Cam Dineen for the longest on the team after the defenseman also notched an assist on Thursday. While Carcone added to his league lead for total points to 41 (16g 25a), Dineen has moved into a tie for fifth in the American Hockey League in scoring by a blue-liner with 2 goals and 19 assists.

“It’s been a lot of games, and that can be tough on the body. We got back pretty late from Coachella Valley with a quick turnaround to today, but that’s what it’s all about. It’s a professional league, we just have to bring it every night.”

Roadrunners forward Boko Imama on wrapping up a stretch of seven games in eleven days on Friday with the series finale against San Diego.

Number to Know
3 – The number of Roadrunners players to score their first goal of the year in Thursday’s series opener against the San Diego Gulls. Defensemen Devante Stephens and Victor Soderstrom, along with forward Curtis Douglas all lit the lamp for the first time this season in Tucson’s 6-2 win over the Gulls. Stephens and Soderstrom both found the back of the net in the second period to help Tucson build a 4-2 advantage, while Douglas’ goal with 8:27 left in regulation capped off the scoring in his 100th game in the American Hockey League. The trio brought the total number of players to score a goal for the Roadrunners this season up to 21, which is already just five away from last season’s total of 26. In addition, 12 Roadrunners have lit the lamp in three games against the Gulls this year.