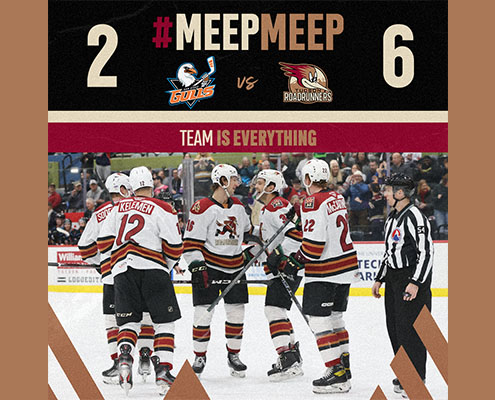 Tucson, Arizona – The Tucson Roadrunners hosted the San Diego Gulls for the first time this season at the Tucson Arena, as they defeated their I-8 Border Rivals for the fifth-straight meeting by a score of 6-2. The Roadrunners tallied three power-play goals, while five different skaters posted multiple-point performances. Tucson netminder Jon Gillies earned the win in his first start of the year against San Diego, as he made 26 saves and held the Gulls scoreless for the first 37:04 of the contest. The Roadrunners and the AHL affiliate of the Anaheim Ducks will close out the two-game set from the Old Pueblo Friday night at 7 p.m. MST.

Roadrunners forward Mike Carcone opened the second-period scoring on Thursday night against the San Diego Gulls with his league-leading tenth power-play goal of the season. The goal gave the Roadrunners a 2-0 lead over their I-8 Border Rivals in the second period of play, and extended Carcone’s AHL lead for power-play points (23) and total points (41). Each of Tucson’s first two goals on Thursday came on the man-advantage, marking five-straight power-play goals for the Roadrunners dating back to their 3-2 win over Coachella Valley on Thursday.

POWER-PLAY PREVAILS – The Roadrunners scored three power-play goals for the second-straight game and for the third time in their last five contests on Thursday against the San Diego Gulls. Tucson lit the lamp on the man-advantage in all three periods against their I-8 Border Rivals, while Mike Carcone extended his league lead for power-play points to 23 (10g 13a) with a goal and an assist. Carcone became the first player in the AHL to reach double-digit power-play goals this season with his strike to open the second-period scoring.

Tucson Roadrunners forward Curtis Douglas scored the sixth and final goal for the Roadrunners in Thursday’s 6-2 win over the San Diego Gulls. The score represented Douglas’ first time lighting the lamp as a Roadrunner, and Thursday was also the 22-year-old’s 100th career AHL game. The six-foot-nine center has recorded three points (1g 2a) over his last five outings and has appeared in nine games for Tucson since being acquired on November 23, 2022.

“It was nice to see Devante [Stephens] get his first goal with us and it was nice to see [Curtis Douglas] get one as well. [Victor Soderstrom] hadn’t scored yet… it was a quality shot by him. Those guys have been working hard and waiting for those [first goals], they finally got them tonight.”

Roadrunners Head Coach Steve Potvin on three different Tucson skaters scoring their first goals of the season in Thursday’s 6-2 win over San Diego. Devante Stephens and Curtis Douglas each tallied their first goals as members of the Roadrunners, while Victor Soderstrom lit the lamp for the first time in his third campaign with the team.

Thursday’s action from the Tucson Arena began with a fight between Tucson’s Boko Imama and San Diego’s Travis Howe, representing the second fight of the season for Imama with 2:11 gone by in the opening frame. The Roadrunners grabbed a 1-0 lead on their first man-advantage of the night with a goal by Milos Kelemen with 8:21 still to play in the first period. Kelemen took a pass from defenseman Dysin Mayo for his seventh goal of the season and Tucson’s third-straight game against San Diego where they lit the lamp first. Thursday also marked the third consecutive contest this year between the Roadrunners and Gulls where Tucson led after 20 minutes of play, as they were up 1-0 at the end of the frame. The Roadrunners extended their lead to 2-0 in the middle period with their second power-play goal of the contest and their fifth-straight goal on the man-advantage overall going back to their 3-2 win over Coachella Valley on Tuesday. The goal came off the stick of Mike Carcone to give him sole possession for the AHL lead in power-play goals, as he became the first player to reach double-digit goals on the man-advantage this year. Tucson broke that streak just 1:48 later when Victor Soderstrom netted a five-on-five goal for his first tally of the season, pushing the lead to 3-0 before the midway point of the second period. The Gulls got on the board with a power-play goal to cut the Roadrunners advantage to 3-1 with 2:56 left in the frame. San Diego’s power-play strike wasn’t the end of the second-period scoring, as Devante Stephens gave Tucson their three-goal cushion back 35 seconds later with his first goal of the season. The Roadrunners continued to lead 4-1 through the midway point of the third period, before San Diego scored their second power-play goal of the evening to make it a 4-2. Tucson answered back with a power-play strike of their own less than a minute after San Diego scored, followed by another goal just 19 seconds later to quickly make it 6-2. J.S. Dea notched his 12th goal of the year and fourth while on the man-advantage, while Curtis Douglas tallied his first goal since joining the Roadrunners in late November to give Tucson their largest lead of the game. The Roadrunners were able to keep the Gulls from scoring for the final 9:52 of the third period, as they cruised to a 6-2 victory in their return to the Tucson Arena from a three-game road trip.