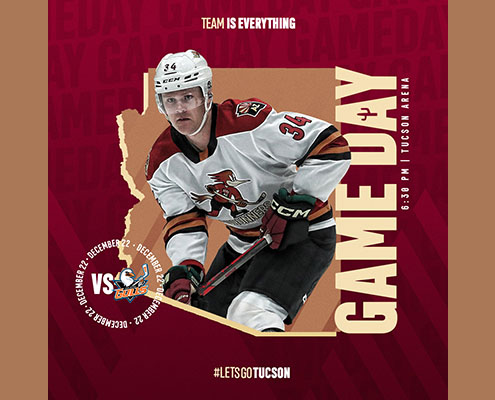 The 13-9-4-0 Tucson Roadrunners return home for the final two games before Christmas, as they’ll take on the San Diego Gulls Thursday and Friday at the Tucson Arena. Thursday marks the Gulls first trip to the Old Pueblo since the final two games of the 2021-2022 campaign, which were both won by the Roadrunners. The series opener with San Diego is also a Thirsty Thursday night at the Tucson Arena with the Barstool Sports Arizona Bowl. $3 Draft Beers will be available at the Arena, and fans can purchase Rudy’s Texas B-B-Q’s Family Packs to attend the game that include four tickets, four hats and a Gift Card to Rudy’s Texas B-B-Q. For more information and to purchase tickets, visit TucsonRoadrunners.com/Fun.

Three Things
1) With over two months gone by in the 2022-2023 American Hockey League regular season, the most exciting player to watch has been Roadrunners forward Mike Carcone. Carcone leads the league in scoring with 39 points in 25 outings (15g 24a). At this time last year, the AHL’s leading scorer had amassed 34 points, and no player had reached 15 goals or 24 assists. Carcone has provided all types of offense for Tucson, as he is tied for the league lead in power-play goals (9) and leads the AHL with 21 total power-play points. The 26-year-old is coming off of his 12th multiple-point performance of the season, with two goals and an assist on Tuesday in Coachella Valley. By comparison, Carcone has been held without a point in only six outings this season and has gone back-to-back games without a point just once in the last year.

2) Tucson’s special-teams units have been up been up to the task over their last six games, with 11 power-play goals scored and just five allowed during that stretch. In their last contest on Tuesday, December 20 in Coachella Valley, the Roadrunners scored all three of their goals on the man-advantage and were a perfect six-for-six on the penalty-kill in their 3-2 win over the Firebirds. Tucson has conceded just one five-on-four goal in two games against the Gulls this season, and their 26 total power-play goals scored is the third-most in the AHL’s Pacific Division behind Calgary (36) and Abbotsford (27).

3) The Roadrunners and Gulls have met twice on the season, with both games taking place at the Pechanga Arena in San Diego. The Roadrunners won both contests by multiple goals: a 3-1 victory on November 23, followed by a 9-4 win on December 17. Saturday’s defeat of the Gulls matched a franchise mark for the most goals scored in a game for Tucson, as well as set a new team record for the most scoring in a single period with a six-goal opening frame. Tucson possesses a three-game winning streak against their I-8 Border Rivals on their home ice dating back to a 6-4 win on October 30, 2021, and a four-game winning streak overall. Their four-game streak dating back to the end of last season is the longest between Tucson and San Diego since the Roadrunners won eight-straight in 2018. The Gulls have not taken the ice since their meeting with the Roadrunners on Saturday, December 17, while Tucson is coming off of a 3-2 victory at the Acrisure Arena in Coachella Valley on Tuesday.

“Any time you can take two out of three [games], that’s a good road trip. We’re happy with it and we’re happy with the way we’ve played. It’s been a lot of hockey, but we know the break is coming up and we’ll try to use that to our advantage. We’ll regroup, refresh, and get back at it after these two games with San Diego.”

Roadrunners forward Mike Carcone on Tucson’s latest three-game road trip and their upcoming series with the San Diego Gulls before the Holiday Break.

Number to Know
8 – The number of players to record a multi-point outing in Tucson’s last meeting with the San Diego Gulls: a 9-4 win at the Pechanga Arena on Saturday, December 17. AHL leading scorer Mike Carcone led the way with a four-point performance (2g 2a), while Adam Cracknell (1g 2a), Cam Dineen (1g 1a), J.S. Dea (2a), Milos Kelemen (2a), Nathan Smith (2g), Ryan McGregor (2a), and Laurent Dauphin (2g) all factored into multiple goals. The nine goals scored by the Roadrunners matched a franchise record for goals in a game, which they had previously set on May 1, 2021, on the road against San Diego. In that game, seven Tucson skaters recorded multiple points, including four assists from Mike Carcone and three assists from Ryan McGregor.

We’re Doing It Live
Tonight’s game will be broadcast live on AHLtv, as well as on the radio at FOX Sports 1450AM and the iHeartRadio app. Pregame coverage will begin at 6:15 with Roadrunners Warm-Up hosted by Jimmy Peebles, before “Voice of the Roadrunners” Adrian Denny has all the action from the Tucson Arena.