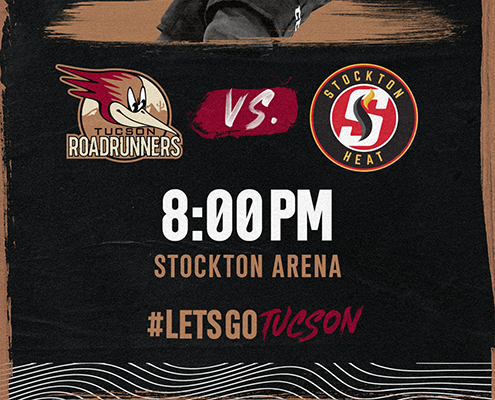 The Tucson Roadrunners continue their six-game road trip with their second of four opponents, the Stockton Heat Saturday night for the Roadrunners first-ever televised road game. The matchup with the first-place Heat will be broadcast live in Southern Arizona on The CW Tucson for the team’s fourth televised contest of the season. The Roadrunners began the 2021-2022 season in Stockton, splitting the opening series with an overtime win on October 15.

Three Things
1) After meeting for three two-game sets already this season, the Roadrunners will be taking on the Heat Saturday night in a standalone matchup. Tucson has a 3-3 record against the Stockton Heat this season, with four of the six games decided by just one goal. The Roadrunners have won by way of overtime, shootout, and regulation in their three victories over the Calgary Flames AHL affiliate. Saturday’s game will give the winning team the edge in the season series until the squads meet again on April 20.

2) Over six games this season against the Stockton Heat, the Roadrunners have had 19 different players record a point. Leading the way are Victor Soderstrom and Hudson Fasching with four points apiece. 11 of the 19 players have scored a goal against Stockton, including current Coyotes defenseman Vlad Kolyachonok with the overtime game-winner in the Roadrunners season opener against the Heat at the Stockton Arena on October 15.

3) The Roadrunners have been finishing strong on the offensive side of the ice, as the team has fired off the most shots on goal in the third period of each of their last three contests. Tucson has recorded at least 12 shots on goal in each of the last three final frames, including in the Roadrunners three-goal third period on Wednesday against the San Jose Barracuda, a 4-3 comeback victory.

What’s The Word?
Roadrunners forward Cedric Lacroix on the physical aspect of his game. Saturday marks Lacroix’s fifth game of the year with Tucson, and the 27-year-old debuted with the Roadrunners by getting in a fight in his first period with the team last Saturday:

“I take pride in being a physical player, sometimes it just happens that the gloves get dropped.”

Number to Know
18 – The number of shots on goal by the Roadrunners in the third period of Friday’s clash with the San Jose Barracuda, setting a new season-high for most in a period by Tucson. A sizeable portion of those shots came on a double-minor power-play, that saw the Roadrunners shoot the puck on key scoring chances.

We’re Doing It Live
Tonight’s game will be broadcast on AHLtv and live in Southern Arizona on The CW Tucson, as well as on the radio on Fox Sports 1450AM, or on the iHeartRadio app. Coverage begins at 7:45 p.m. MST with Roadrunners Warm-Up, as Jimmy Peebles gets you ready for the game before “Voice of the Roadrunners” Adrian Denny has the call at 8:00 p.m. live from the SAP Center.