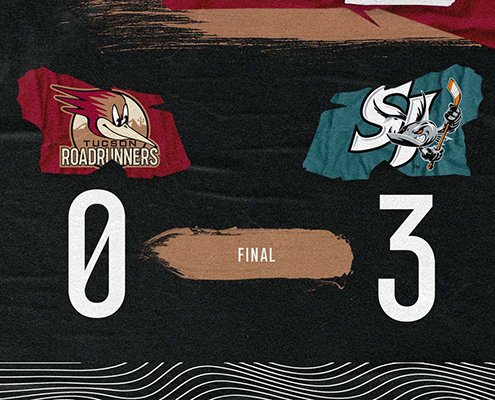 San Jose, California – The Tucson Roadrunners concluded their series against the San Jose Barracuda with game two of their six-game road trip across California Friday night at the SAP Center. Tucson outshot the Barracuda but couldn’t get the bounces they were looking for while on offense, falling to San Jose by a score of 3-0. Josef Korenar started his second-straight contest for the Roadrunners and recorded 21 saves in his second meeting with his former team.

Similar to Wednesday’s series opener, the Barracuda grabbed the first lead of the night with a goal just past the midway point of the first period. San Jose was able to extend their lead with just under four minutes remaining in the opening frame, when they went on their first power-play of the contest. The goal was scored by Scott Reedy, San Jose’s leading scorer and fifth-highest scoring rookie in the AHL, behind Roadrunners forward Matias Maccelli at third. Tucson entered the first intermission trailing by a pair of goals, but a combined 11 shots in the period by both teams meant plenty of room to get back even with the Barracuda. Both teams surpassed their shots on goal totals from the first period in the next 20 minutes but neither squad lit the lamp, leaving the score at 2-0 in favor of the San Jose Barracuda entering the third period. Tucson went on their first power-play of the evening in the final 13 seconds of the middle period, but it was quickly negated by a penalty on the Roadrunners, and the teams skated four-on-four to begin the final frame. Tucson got another opportunity with their first full power-play of the night, but it was San Jose that scored a goal while the five-on-four was active with their league-leading eighth shorthanded strike of the season. The Roadrunners last chance of the night came with 4:25 still to play in regulation, when forward Jan Jenik drew a double-minor to put Tucson on an extended power-play. The Roadrunners saw some good looks while on the man advantage, but Barracuda backstop Sam Harvey denied every shot that came his way, earning his second AHL shutout in only his third appearance. Tucson skated shorthanded from the beginning of the matchup, dressing only 10 forwards with several key players missing from Friday’s lineup.

The Roadrunners will continue their California road trip with a matchup against the Stockton Heat Saturday night at 8 p.m. MST, with coverage beginning at 7:45 on Fox Sports 1450AM with Roadrunners Warm-Up hosted by Jimmy Peebles. Then, “Voice of the Roadrunners” Adrian Denny will have all the action live from the Stockton Arena. The game will also be broadcast live in Southern Arizona on The CW Tucson, for the Roadrunners first-ever televised road contest.

“The effort was there tonight. With only ten forwards, everyone was getting their chances. We had a few good looks, but their goalie made some nice saves and there were a couple tough bounces there for us. Overall, I thought we worked hard and played a solid game.”

Roadrunners forward Tyson Empey on the team’s effort in Friday’s contest with the San Jose Barracuda. Tucson rifled off 18 shots in the third period, including a barrage on an extended power-play.

FINISHING STRONG – The Roadrunners kept battling to the very end of Friday’s 3-0 defeat at the hands of the San Jose Barracuda, rattling off 18 shots on goal in the third period alone. A flurry of those shots came while on a late double-minor power-play, as Tucson tried to erase the late deficit in San Jose.

Watch Tucson Roadrunners defenseman Cam Crotty block a shot on the Roadrunners penalty-kill in the first period of Friday’s contest with the San Jose Barracuda, as Tucson entered the game 22 for their last 23 attempts on the penalty-kill with efforts like this.

Tucson Roadrunners goaltender Josef Korenar stands in net during Friday’s matchup with his former team, the San Jose Barracuda. The contest marked Korenar’s second start against his old squad and the netminder stopped 21 shots on goal.