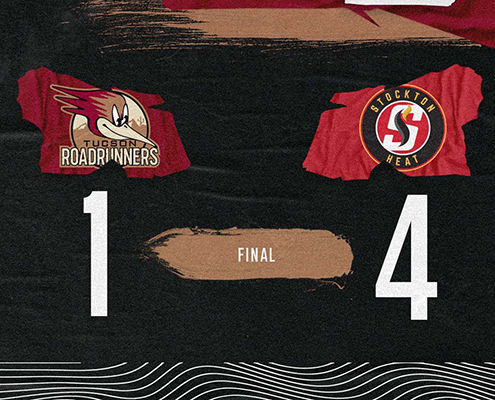 ROADRUNNERS TAKE ON STOCKTON HEAT FOR SEVENTH TIME THIS SEASON, FALL 4-1 ON THE ROAD

Stockton, California – The Tucson Roadrunners took on the Stockton Heat for the seventh time of the 2021-2022 campaign Saturday night on the road at the Stockton Arena. The Roadrunners battled back late to score a power-play goal, but in the end fell by a score of 4-1. Josef Korenar started in net for the third time in four games for the Roadrunners and stopped 28 shots on goal.

The Heat jumped out to an early lead with a goal by Ryan Olsen at the 5:21 mark of the opening frame, his first of the season. Goaltender Josef Korenar was screened by a member of the Heat in front of the net, leading to the score for Stockton. The Calgary Flames AHL affiliate added another goal just past the midway point of the first period when Matthew Phillips extended his team lead for goals with his 13th strike of the season, making the score 2-0. The Roadrunners went on their first power-play of the evening shortly after the goal was scored but couldn’t find the back of the net despite several near-misses. Tucson was able to funnel pucks toward the net at a high frequency but remained scoreless after the horn sounded on the first period. It looked as if the Roadrunners were going to have their third-straight contest without either team lighting the lamp in the second period, but a power-play goal for the Heat with 54 seconds remaining in the frame pushed their lead to 3-0. Tucson continued to get pucks toward the net, but Stockton netminder Adam Werner turned everything aside for the first 54:57 of the game. Tucson drew their fourth power-play of the night late in the third period, and just 30 seconds into the man advantage the Roadrunners penetrated Stockton’s league-leading penalty-kill unit for their first goal of the contest. With time ticking off the clock in the final five minutes of regulation, Tucson pulled Korenar out of the net in favor of a six-on-five attack. An empty-net strike by Glenn Gawdin of Stockton secured the win for the Heat. The Roadrunners fell by a score of 4-1 and won’t face Stockton again until the final weekend of the regular season.

Tucson’s road trip will roll on when the team heads to Bakersfield Condors for a midweek matchup Wednesday night at the Mechanic’s Bank Arena. Puck drop is slated for 8 p.m. MST, with coverage beginning at 7:45 on Fox Sports 1450AM with Roadrunners Warm-Up hosted by Jimmy Peebles. Then, “Voice of the Roadrunners” Adrian Denny will have all the action live from Bakersfield for the first meeting on the season between the two teams.

Roadrunners forward Cameron Hebig on looking for results after dropping a pair of games despite solid puck possession and the creation of quality chances on offense.

DEBUTS FOR DAYS – This weekend was one filled with debuts for new and returning Roadrunners faces. Friday’s game with the San Jose Barracuda marked the first appearance of defenseman Ryan DaSilva in a Roadrunners uniform after being signed to a PTO out of Tulsa (ECHL). Saturday saw Stephen Harper make his debut for Tucson after being acquired from the Chicago Wolves, as well as the return of Doyle Somerby to the Tucson roster. Somerby appeared in 24 games with the Roadrunners last season and was recently re-acquired from the Iowa Wild.

Watch Tucson Roadrunners forward Cameron Hebig bury his seventh goal of the season just 30 seconds into Tucson’s second power-play of the third period Saturday night in Stockton. The goal marked Hebig’s first tally of the season while on the man advantage and put him into double digits for total points on the year.

Tucson Roadrunners forward Matias Maccelli handles the puck in Saturday’s matchup with the Stockton Heat. The 21-year-old assisted on the Roadrunners power-play goal late in the third period for the eighth point in his last six outings.