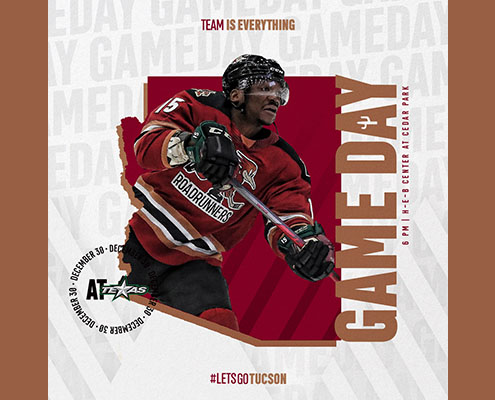 The 14-10-4-0 Tucson Roadrunners head out on the road for the final two games of the 2022 calendar year with a weekend series with the Texas Stars at the H-E-B Center in Cedar Park Friday and Saturday. Friday’s series opener marks the first meeting of the season between Tucson and the AHL affiliate of the Dallas Stars, and the first trip to Texas for the Roadrunners since March 12, 2022. The Stars enter the series atop the AHL’s Central Division in terms of standings points with a 17-7-3-2 record and have not taken the ice since a 3-2 overtime loss to Rockford on December 21. Meanwhile, Friday is Tucson’s first game since they hosted the San Diego Gulls a week ago on Friday, December 23.

Three Things
1) The Roadrunners and Stars faced off four times last season, as Tucson took the first meeting of the 2021-2022 campaign with a 4-0 victory. The matchup at the Tucson Arena on Saturday, October 23 featured a hat trick from forward Ben McCartney, as well as goaltender Ivan Prosvetov’s second consecutive shutout to begin the season. Prosvetov appeared in all four outings against the Stars in 2021-2022 with 94 total saves made. The Roadrunners enter the weekend set with a 12-11-3-0 regular-season record against the Stars dating back to their time spent as AHL Pacific Division rivals from 2016 to 2018. Tucson and Texas also met in the second round of the 2018 Calder Cup Playoffs, with three of the five games being decided in overtime.

2) Friday’s matchup with the Texas Stars represents Tucson’s first out-of-division contest of the season, with 12 total games scheduled against three AHL Central Division opponents. Following the weekend set in the Lone Star State, the Roadrunners will host the Milwaukee Admirals and Chicago Wolves at the Tucson Arena for a pair of games apiece during the month of January. Starting with Texas, Tucson will take on five different teams for the first time over their next 14 games, as they will also play host to the Colorado Eagles and Abbotsford Canucks. The Roadrunners have defeated all seven previous opponents this year at least once, and earned a standings point against all three of their Central Division opponents last season: Iowa, Rockford, and Texas.

3) The Arizona Coyotes made a roster move following the Holiday Break, as they recalled forward Mike Carcone from the Tucson Roadrunners. Carcone led the American Hockey league in total points (42) and power-play goals (10) at the time of his call-up and made his return to the NHL by scoring a goal in Arizona’s 6-3 win over the Colorado Avalanche. The 26-year-old made his National Hockey League debut with the Coyotes on December 28, 2021 and recorded six points (4g 2a) in 21 total games last season for Arizona. The Roadrunners have also made a pair of roster moves, recalling forwards Colin Theisen and Reece Vitelli from the ECHL’s Atlanta Gladiators.

“It’s been good. Our power-play has been clicking pretty well and playing with some of our top offensive guys has been fun. I just try to do my job and get pucks to the net, and there’s been some good bounces.”

Roadrunners defenseman Cam Dineen on his individual season so far. Dineen is tied for fifth in the American Hockey League in scoring by defensemen with 22 points in 24 games (2g 20a). His 20 assists is the third-most among AHL defensemen. In addition, his 15 power-play assists is tied for the league lead.

Number to Know
16 – The number of games over the next 33 days for Tucson, beginning with Friday’s series opener against Texas. January marks the busiest month of the 2022-2023 campaign for the Roadrunners, with ten home games and 14 total contests against seven different opponents. The Roadrunners entered the break by closing out a stretch of nine games in 15 days, where they earned standings points in six of the nine matchups. After ten games on their home ice at the Tucson Arena in January, their final matchup of the month on January 31 in Bakersfield marks the start of the Roadrunners seven-game Gem Show Road Trip.

We’re Doing It Live
Tonight’s game will be broadcast live on AHLtv, as well as on the radio at FOX Sports 1450AM and the iHeartRadio app. Pregame coverage will begin at 5:45 with Roadrunners Warm-Up hosted by Jimmy Peebles, before “Voice of the Roadrunners” Adrian Denny has all the action from the H-E-B Center.