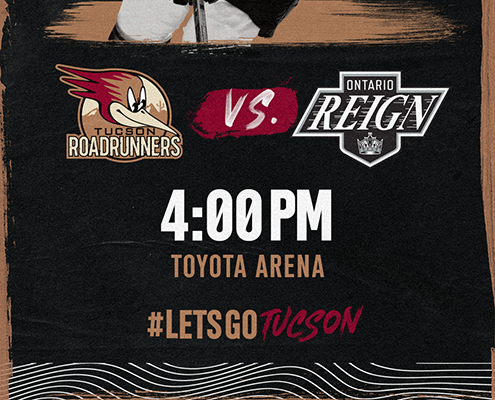 The Tucson Roadrunners will play the final game of their two-week road trip Sunday afternoon, a rematch with the Ontario Reign at the Toyota Arena. The Reign took the first game of the series Saturday night, evening the overall season series at two wins apiece. The Roadrunners saw some key players return to the ice Saturday night, as forwards Blake Speers, Terry Broadhurst, and Ben McCartney all made their way back into the Tucson lineup.

Three Things
1) Roadrunners forward Travis Barron has been a key contributor to the team’s offense as of late. The 23-year-old has opened the scoring for Tucson in each of their last two contests, and has tallied five goals since December 10, leading the team during that stretch. Barron has already set season-highs in the AHL for goals, assists, and points with a 5-4-9 stat line through 26 outings in his first year as a Roadrunner.

2) Scoring the third and final goal for the Roadrunners in Saturday’s contest was rookie forward Matias Maccelli. The score represented Maccelli’s second point of the night, after the 21-year-old assisted on the previous goal for Tucson. With the goal, Maccelli became one of five AHL rookies with double-digit goals and assists and leads the Roadrunners in both categories with 10 and 20, respectively.

3) After wrapping up the six-game road trip across California Sunday afternoon, the Roadrunners will return home for a three-game set with the Bakersfield Condors at the Tucson Arena. The series marks the Condors first trip to the Tucson Arena since January 2020, and will feature an El Lazo de Tucson night on Friday, January 28, followed by Star Wars night on Saturday, January 29. For more information on the series and to purchase tickets, click HERE.

What’s The Word?
Roadrunners forward Ben McCartney on sticking to the team structure while getting key players back into the Tucson lineup:

Number to Know
5 – The number of consecutive games Tucson forward Mike Carcone has recorded a point entering Sunday’s meeting with the Ontario Reign. Carcone’s streak dates back to January 5 and, marks both a season-high for the Roadrunners and a career-high for the 25-year-old.

We’re Doing It Live
Today’s game will be broadcast on AHLtv, as well as on the radio on Fox Sports 1450AM, or on the iHeartRadio app. Coverage begins at 3:45 p.m. MST with Roadrunners Warm-Up, as Jimmy Peebles gets you ready for the game before “Voice of the Roadrunners” Adrian Denny has the call at 4:00 p.m. live from Toyota Arena.