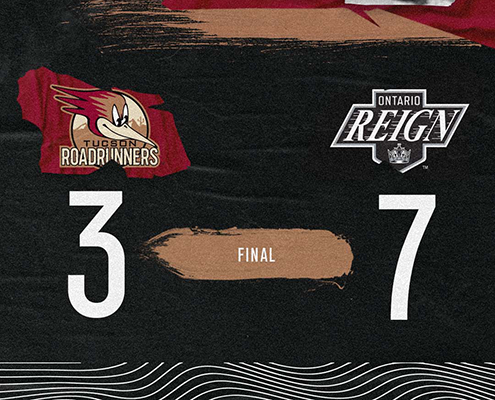 Ontario, California – The Roadrunners continued their road trip to Southern California to face the fourth and final team on the trip, the Ontario Reign, Saturday night at the Toyota Arena. The Reign were relentless on the attack, backed by a Martin Frk hat trick, and handed the Roadrunners a 7-3 loss in the first of two matchups over the weekend in Ontario. Tucson recorded 25 shots on goal over their last two periods, with all three goals being scored from the second period onward.

The first goal of the evening belonged to the Reign, as Ontario broke open the scoring with 3:20 left in the first period to take a 1-0 lead. The Los Angeles Kings AHL affiliate continued to build their lead with a second goal 19 seconds later, and another score 1:21 after that. At the end of the opening frame, the Reign led 3-0 with all three goals scored just 1:40 apart. Ontario opened the second period with their fourth-straight tally 2:49 into the middle frame, capping off a sequence of four goals in the span of 6:09. Tucson’s offense came alive less than two minutes later, with Travis Barron netting his fifth goal of the year and second in as many games. The Roadrunners pulled to within two goals with a shot deflected by Jan Jenik to give Tucson their second score in 3:02. Ontario regained the momentum with another quick pair of goals just past the midway point of the period with their first trip to the power-play. Tucson entered the final 20 minutes of play trailing 6-2, and it was once again the Reign to open the scoring in the third period. Martin Frk completed the hat trick with his second power-play strike of the evening, giving the Reign their largest lead of the night at 7-2. The Roadrunners answered back with Matias Maccelli’s team-leading tenth goal of the season, giving the 21-year-old his sixth multiple-point performance of the season. The final 12:56 were without any more scoring, and the Ontario Reign came away with a 7-3 victory over the Roadrunners, evening up the season series at two wins apiece. Josef Korenar started in net for the Roadrunners and was relieved by Ivan Prosvetov at the start of the third period, as the pair combined for 23 saves.

The Roadrunners conclude their current road trip with the sixth and final game Sunday afternoon, a rematch with the Ontario Reign at the Toyota Arena slated for 4:00 p.m. MST, with coverage beginning at 3:45 on Fox Sports 1450AM with Roadrunners Warm-Up hosted by Jimmy Peebles. Then, “Voice of the Roadrunners” Adrian Denny will have all the action live from Ontario, California.

“We have to play for a full sixty minutes and capitalize on our chances when we get them. I think that was the big difference tonight, [Ontario] capitalized and we didn’t. We’ll look at some video and get back to it tomorrow.”

Roadrunners forward Mike Carcone on the takeaways from Saturday night’s 7-3 loss on the road to the Ontario Reign. Tucson will be back at the Toyota Arena Sunday afternoon to wrap up the weekend series and overall six-game road trip.

CARCONE KEEPS GOING – Roadrunners forward Mike Carcone assisted on the team’s first score of the night with a cross-ice pass to Travis Barron. The assist extended Carcone’s active scoring streak to five games, a season-high for the Roadrunners and a career-high for Carcone. The 25-year-old is tied for second on the team in goals with eight, with four of those coming in his last seven outings.

Watch Tucson Roadrunners forward Travis Barron score the first goal for Tucson in the second-straight contest with this feed from Mike Carcone 4:37 into the second period. Barron has five goals dating back to December 10, leading the Roadrunners during that span.

Tucson Roadrunners forward Jan Jenik takes the faceoff in Saturday night’s matchup with the Ontario Reign in California. Jenik had the Roadrunners second goal of the contest in the second period for his eighth score of the season, tied for second on the team with Mike Carcone.