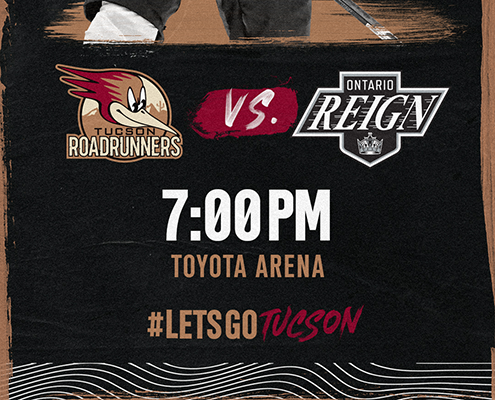 The Tucson Roadrunners begin the final weekend of their six-game road trip with a pair of games against the Ontario Reign at the Toyota Arena. Saturday’s game marks the first of the weekend, and first meeting between the Roadrunners and Reign since December 18, 2021, at the Toyota Arena. Tucson will look to stay perfect in Ontario this year with a win Saturday night.

Three Things
1) The Roadrunners are back at the Toyota Arena for the second time this season, after a 4-3 comeback victory in overtime on December 18. Tucson overcame a 1-0 deficit midway through the first period, followed by 2-2 and 3-3 ties to head to overtime with the Los Angeles Kings AHL affiliate. Less than a minute into the extra three-on-three period, defenseman Vlad Kolyachonok netted his second overtime game-winning goal of the season, giving the Roadrunners their first of two-straight comeback wins on the road. The second came in the first contest of Tucson’s current six-game road trip on January 12, with forward Cameron Hebig netting a crucial goal in each of the matchups.

2) Back in the crease Wednesday night for the Roadrunners in Bakersfield was goaltender Ivan Prosvetov. The 22-year-old has a 2-0 record against the Ontario Reign so far on the season to improve to 7-2 for his career. Ivan boasts three-straight wins in Ontario with a 4-1 record all-time as the visiting team against the Reign. In total, Prosvetov has allowed just four goals in three road wins this season, including a 29-save shutout to open the year in Stockton.

3) Forward Michael Carcone returned to the Roadrunners roster for Wednesday’s game in Bakersfield against the Condors, and the 25-year-old buried the puck for his third power-play strike of the season, and second in as many games. Carcone now has a four-game active scoring streak dating back to January 5, as well as six points in as many games (4g 2a). Carcone has three points in three meetings with the Ontario Reign this season, including a multi-point outing back on November 12 at the Tucson Arena, an 8-4 Roadrunners victory.

What’s The Word?
Roadrunners forward Travis Barron on entering the series with the Ontario Reign hungry for a pair of wins:

“Hockey’s more fun when you get the two points. That’s all we’re concerned about right now and hopefully we can get a couple wins this weekend.”

Number to Know
8 – The number of points recorded by rookie forward Matias Maccelli in only three games against the Ontario Reign. This includes a five-point night on November 12, that saw the 21-year-old tally his first career AHL hat trick. Maccelli enters the weekend series with the Reign having put up nine points in his last seven efforts, dating back to his two-assist night against the Ontario Reign on December 18.

We’re Doing It Live
Tonight’s game will be broadcast on AHLtv, as well as on the radio on Fox Sports 1450AM, or on the iHeartRadio app. Coverage begins at 6:45 p.m. MST with Roadrunners Warm-Up, as Jimmy Peebles gets you ready for the game before “Voice of the Roadrunners” Adrian Denny has the call at 7:00 p.m. live from Toyota Arena.