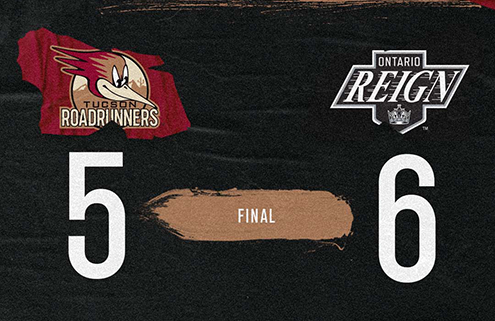 Ontario, California – The Roadrunners concluded their six-game road trip Sunday afternoon with the second of two weekend matchups against the Ontario Reign at the Toyota Arena. Both teams were effective on their power-play, with each unit scoring three goals while on the man advantage. Michael Carcone, Jan Jenik, Matias Maccelli, Vlad Kolyachonok and Travis Barron each extended their active point streaks of at least three games in the contest.

The story of the first period was all about the power-play units of the Roadrunners and Reign, with each team netting a pair of goals while on the man advantage. Tucson took the first lead of the afternoon with Mike Carcone’s fourth special-teams strike of the season at the 12:42 mark of the opening frame. Ontario followed that up with a pair of power-play scores just 2:24 apart to take their first lead of the day. The Roadrunners answered back less than a minute later with the fourth and final power-play goal of the period, this time by Jan Jenik for his team-leading fifth tally while on the man advantage. Tucson and Ontario entered the second period tied at two, but Cameron Gaunce broke the tie just 1:19 into the middle frame. The Reign continued to build their lead to 5-2 with a pair of goals with 5:49 and 15:44 gone by in the period, with the latter coming during Ontario’s third trip to the power-play. The Roadrunners avoided a scoreless period and got a goal back when Tyson Empey netted the first goal of his AHL career with two minutes remaining in the second. Empey was rewarded after a road trip of gradually stepping up his role on offense for Tucson. The Roadrunners began the third period trailing by two goals, but a score by Cole Hults brought them to within one past the midway point of the period. Hults’ goal was his third of the season and second against his former team at the Toyota Arena. The Reign regained their two-goal lead 1:26 after the Hults score, but another power-play strike by Terry Broadhurst 1:53 later brought it back to a one-goal deficit with 5:16 still to play in regulation. Tucson drew another power-play and opted to pull goaltender Ivan Prosvetov for an extra attacker looking for the equalizing goal. The Roadrunners had several close calls, but a Jan Jenik shot that hit the post was the best look the Roadrunners saw as the Reign came away with a 6-5 victory to close out the series. Prosvetov made his second start of the road trip, stopping 19 shots on goal.

The Roadrunners return home for a three-game set at the Tucson Arena with the Bakersfield Condors, their first trip to the Old Pueblo since January 2020. The series opener is scheduled for Wednesday, January 26, at 6:30 p.m. MST. Coverage begins at 6:15 on Fox Sports 1450AM with Roadrunners Warm-Up hosted by Jimmy Peebles. Then, “Voice of the Roadrunners” Adrian Denny will have all the action live from the Tucson Arena.

“[Maccelli’s] a great player, a playmaker that can really find the passes. There’s not much to say, he’s just a great player that’s a pleasure to play with.”

Roadrunners forward Jan Jenik on the offensive abilities of fellow Arizona Coyotes prospect Matias Maccelli. The 21-year-old assisted on a first-period goal by Jenik, a power-play strike that marked Jenik’s ninth score of the season and Maccelli’s 22nd assist.

FRIENDLY COMPETITION – The Roadrunners pair of goals in the first period Sunday afternoon came from forwards Mike Carcone and Jan Jenik. Both goals were scored while on the power-play and marked each of the players’ ninth scores of the season. The remain tied for second on the team in goals, and extended Jenik and Carcone’s active point streaks to four and six games, respectively.

Watch Tucson Roadrunners forward Tyson Empey net his first career AHL goal in Sunday’s contest with the Ontario Reign. Empey had been flirting with the goal for most of Tucson’s road trip, and was finally able to light the lamp in the sixth and final game of the trip with assists by Ben McCartney and Cole Hults.

Tucson Roadrunners defenseman Vlad Kolyachonok skates in the Roadrunners zone during Sunday’s matchup with the Ontario Reign. Kolyachonok tallied an assist in the contest, extending his active point streak to four games dating back to January 9 prior to his call-up to the Arizona Coyotes.

Tucson Roadrunners Road Ahead: Returning To Tucson
Scroll to top