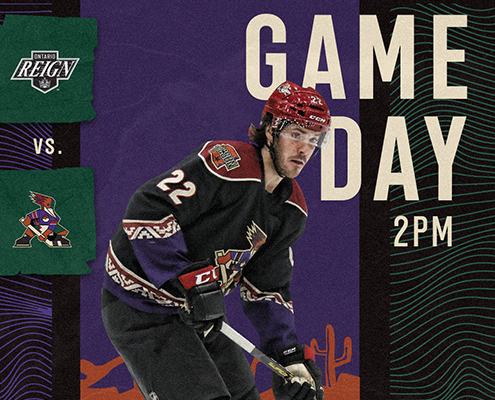 The Tucson Roadrunners conclude the 2021 AHL regular season in front of their home crowd Sunday afternoon, in a game that will be televised live on The CW Tucson, as the Roadrunners take on the Ontario Reign. Tucson will look for two more points in the standings before they head to Irvine, California to take on the San Jose Barracuda in the first round of the AHL Pacific Division Playoffs on Tuesday.

Three Things
1) Special teams was the highlight of the Roadrunners matchup with the Ontario Reign on Friday night, as Tucson excelled on both sides of five-on-four situations. The Roadrunners opened the scoring early on in the first period when Jan Jenik cashed in on the team’s first power-play of the game, taking a 1-0 lead 3:13 into the game. On the other side of the man advantage, the Roadrunners continued to excel on their penalty-kill, stifling all five of the Reign’s power-play opportunities. The Roadrunners are tied atop the league in penalty-kill percentage heading into the final game of the season.

2) Roadrunners forward Jan Jenik was the one to open the scoring for the Roadrunners in Friday’s clash with the Ontario Reign, with a power-play goal early in the first period. With that score, Jenik has three goals in the last two games with the Tucson Roadrunners, with a two-game stint with the Arizona Coyotes of the NHL between those appearances. Jenik scored a goal in each of the first two NHL games, as the Coyotes closed out their season last weekend in San Jose.

3) After Sunday’s game, the Tucson Roadrunners will be traveling to Irvine, California to participate in the 2021 AHL Pacific Division Playoffs. They’ll take on the San Jose Barracuda in the first round of the single-elimination play-in tournament on Tuesday at 1 p.m. MST. With a win, they’ll play the winner of Colorado-Ontario for the fourth and final spot in the next round of the playoffs on Wednesday. If the Roadrunners advance, the team will head to Las Vegas to clash with the top-seeded Henderson Silver Knights in a best-of-three series.

What’s The Word?
Tucson Roadrunners forward Frederik Gauthier on playing alongside and helping the young talent on the Tucson roster this season:

“When you’re young, you have a lot to learn; but the more you play, the better you get. When you’ve played more games you try to give those guys cues and help them out. I think they’re great players and they’re picking things up fast and playing well.”

Number to Know
5 – The number of Roadrunners players to appear in all 35 games this season prior to the regular season finale against Ontario Sunday afternoon. Kevin Roy, Ryan McGregor, Tyler Steenbergen, Dysin Mayo and Nate Sucese have been consistent playmakers for Tucson this season, combining for 31 goals and 77 total points. Roy, McGregor and Sucese are all new to the Tucson roster this season, with McGregor and Sucese in their rookie seasons in the AHL. Dysin Mayo, the only defenseman on the list, has been with the Roadrunners for all five seasons in the Old Pueblo.