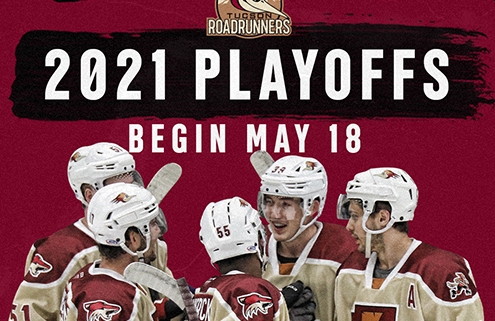 Tucson, Arizona –  The Tucson Roadrunners, owned and operated by the Arizona Coyotes, will open the 2021 Pacific Division Playoffs Tuesday at 1 p.m. against the San Jose Barracuda.

All Pacific Division playoff games will be available for viewing on AHLTV. All Roadrunners games will be broadcast live on Fox Sports 1450 AM and the iHeartRadio app as well.

Tucson concludes the regular season Sunday at 2 p.m. from Tucson Arena to complete Fan Appreciation Weekend. The game can be seen locally on The CW Tucson. A limited number of tickets are available at TucsonRoadrunners.com/WelcomeBack.

Sunday all fans will receive a Roadrunners Fifth Anniversary Team Poster. The game will also be televised on CW Tucson.

Sunday’s contest will feature prizes and giveaways featuring the below partners and items for both lucky fans in the arena and those watching on TV at home.