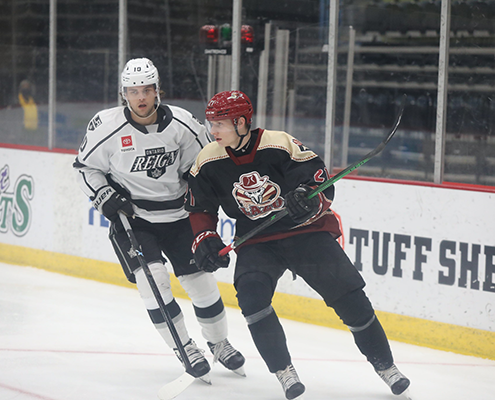 Tucson, Arizona – The Tucson Roadrunners welcomed the Ontario Reign back to the Tucson Arena for the first time since March 17 Friday night, in a back-and-forth battle that couldn’t be decided in the 60 minutes of regulation. The Reign came away with the victory in overtime, off a three-on-three goal by Martin Frk. Chris Nell made his first start in net for the Roadrunners since April 25 and stopped 31 shots in the contest.

The Roadrunners looked solid in the first period of play, going a perfect one-for-one on both their power-play and penalty kill. The lone goal of the period belonged to Jan Jenik, returning from a two-game stint with the Arizona Coyotes. Jenik cashed in on Tucson’s first man advantage of the game, putting the Roadrunners ahead 1-0 only 3:13 into the contest. Chris Nell faced a flurry of shots from the opposing offense but turned all 14 chances on net aside to keep Tucson ahead 1-0 as the teams headed into the first intermission. The offensive floodgates opened in the second period, with three goals scored within the first seven and a half minutes. The first two belonged to the Ontario Reign, who took a brief 2-1 lead off of the stick of Samuel Fagemo and Arthur Kaliyev, with Fagemo’s goal coming shorthanded. Tucson evened the score up less than a minute after Ontario took the lead, with Frederik Gauthier deflecting the puck into the back of the net for his second goal of the season. The teams entered the final period with the score knotted at two. Despite a hefty number of shots on goal by both teams, the score remained the same at the end of the third period, and an extra overtime period was needed to decide Friday night’s contest. The Reign came away with the victory when Martin Frk scored the three-on-three overtime winner with less than a minute left of extra time.

The Roadrunners wrap up their regular season with the Ontario Reign Sunday afternoon at 2 p.m. MST. The game will be broadcast live on The CW Tucson, where “Voice of the Roadrunners” Adrian Denny and Alex Kinkopf of ArizonaCoyotes.com will bring you all of the action. You can listen to the game in Tucson on FOX Sports 1450 AM and on the iHeart Radio app or watch the game on AHL TV.

THANKS TO YOU 520
With the El Lazo jersey auction held at the conclusion of Friday night’s Tucson Roadrunners game, the team and their fans raised nearly $20,000, with all proceeds going to the Boys and Girls Clubs of Tucson.

“Our message has been to grab any percentage we can from every game in order to get better. We’re going to attack [Sunday] just like every other game and try to get those two points. That’s just the way the game is, there’s no reason for us to take our foot off the gas.”

DON’T OVERLOOK IT
SOLID SPECIAL TEAMS – The Tucson Roadrunners special teams units were the highlight of Friday’s matchup with the Ontario Reign. Tucson jumped out to an early lead thanks to a power-play goal by Jan Jenik and were a perfect five-for-five on the penalty-kill. Tucson’s penalty-kill unit has consistently ranked at or near the top of the league all season, and Friday night was no exception.

The Tucson Roadrunners donned their “El Lazo de Tucson” identity for the third and final time of the 2021 AHL season. “Los Diablitos de Sunnyside High School” mariachi band and the ballet folklorico returned once again, performing the National Anthem. Roadrunners mascot Dusty took on his alter-ego of “El Polvo” one last time, and after the game, the team held an auction for game-worn El Lazo jerseys, with all the proceeds benefitting Boys and Girls Clubs of Tucson.