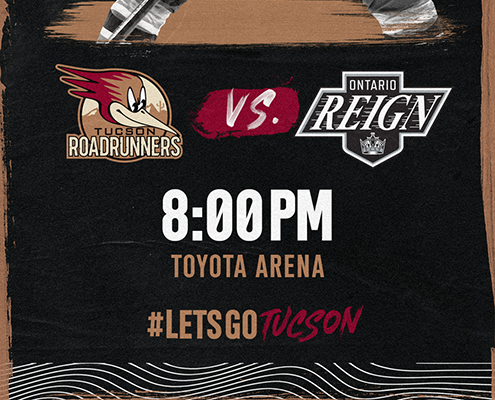 The Roadrunners will head out on the road to begin the month of March with a five-game trip across California and Texas from March 2 to 12. The first stop of the trip is the Toyota Arena in Ontario, California, as the Roadrunners will face the Reign for the eighth and final time on the season. Wednesday’s meeting concludes a stretch of three games in five nights with the Los Angeles Kings AHL affiliate after a pair of matchups last Saturday, February 26 and Sunday, February 27 at the Tucson Arena.

Three Things
1) The Roadrunners will have a chance to even the season series against the Reign with a win in Wednesday’s matchup at the Toyota Arena. Tucson and Ontario have produced some high-scoring battles this season, with an average of 9.4 combined goals across their seven previous meetings. The Roadrunners have scored less than three goals against the Reign only once this season and set a season-high for most goals for in a game with an 8-4 win on November 12. Goaltender Ivan Prosvetov has been in net for all three of Tucson’s wins over Ontario, most recently for a 36-save effort on Saturday, February 26, his second-highest save total in a victory this season.

2) Tucson is heading out on the road after a four-game home stand in the Old Pueblo over the past two weekends. The stretch began with a pair of contests against the Henderson Silver Knights, followed by back-to-back matchups the following weekend with the Ontario Reign. Tucson split both series as the Roadrunners took the final lead in the third period of come-from-behind victories on back-to-back Saturday nights. Eight of the Roadrunners last nine wins have been by one goal, including three of the last four on the road. Two of Tucson’s three contests in Ontario this season have been decided by one goal, including a 4-3 overtime victory on December 18.

3) The Roadrunners will be without their leading scorer Matias Maccelli on Wednesday for the first time since January 5, after the 21-year-old was recalled to the Arizona Coyotes earlier this week. The rookie forward earned the call to the NHL after an impressive February that earned him his second AHL Rookie of the Month Award. Maccelli posted 19 points (4g 15a) in 10 games during February, including a power-play goal and two assists against the Reign last weekend in Tucson. He notched as many games with three or more points in February than outings with one point or less (four), and became the first player to be named Rookie of the Month twice since Frank Vatrano in 2015-2016.

“I feel like we have a great coaching staff and great development coaches around. They help us a lot, watch video with us, tell us what to do better. We work on a lot of stuff during practice, so that’s definitely huge for me.”

Roadrunners forward Jan Jenik on the support he has received from the Tucson coaching staff in his second season with the team.

Number to Know
11 – The number of power-play goals scored by the Roadrunners over the first seven meetings with the Reign on the season. Three of the 11 were scored in Tucson’s last trip to the Toyota Arena on January 23 by Mike Carcone, Jan Jenik and Terry Broadhurst. Carcone and Jenik are tied for the team lead in power-play goals with eight apiece. Carcone scored while on the man-advantage in the first period of last Saturday’s 6-5 win over Ontario for his third against the Reign this season.

We’re Doing It Live
Today’s game will be broadcast on AHLtv, as well as on the radio on Fox Sports 1450AM or on the iHeartRadio app. Coverage begins at 7:45 p.m. MST with Roadrunners Warm-Up, as Jimmy Peebles gets you ready for the game before “Voice of the Roadrunners” Adrian Denny has the call at 8:00 p.m. live from the Toyota Arena.