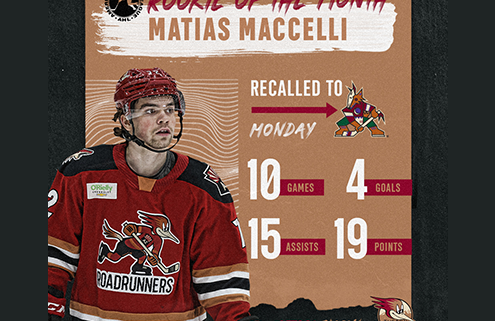 The announcement comes one day after Maccelli was recalled by the Arizona Coyotes of the NHL . The 21-year-old recorded 19 points (4g 15a) in 10 games for Tucson during the month of February, including six multiple-point performances. Maccelli recorded as many games with three or more points as appearances with one point or less (four). He currently leads all AHL rookies in assists (41) and total points (55), and is third in the league overall for both categories.

After tallying two assists at San Diego on February 4, Maccelli notched a goal and two assists in Tucson’s 5-4 win over the Gulls the next night, then contributed four assists in Abbotsford on February 7. He had a three-assist performance as the Roadrunners earned a 3-1 victory at Colorado on February 11, and his three-point night on February 19 helped Tucson rally for a 4-3 win over Henderson on home ice. Maccelli registered his sixth multiple-point game of the month on Feb. 26, when he picked up two more assists in a 6-5 win over Ontario.

Maccelli is the first player to be named AHL Rookie of the Month twice since Frank Vatrano in 2015-16.

A fourth-round choice by Arizona in the 2019 NHL Draft, the 21-year-old Maccelli leads all AHL rookies in scoring and is up to third in the AHL overall with 55 points (14 goals, 41 assists) in 42 games. He is poised to make his NHL debut this week after being recalled by the Coyotes on Feb. 28. Maccelli played the last two seasons with Ilves Tampere in Finland’s SM-liiga, and represented Finland at the 2020 IIHF World Junior Championship.