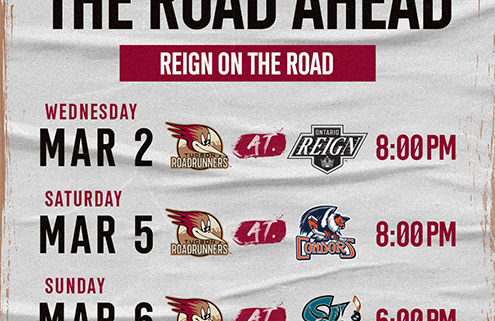 Tucson Roadrunners Road Ahead: Reign On The Road

The Roadrunners open the month of March on the road for a five-game trip across California and Texas, beginning on Wednesday, March 2 against the Ontario Reign. The matchup with the Reign will mark the eighth and final meeting between these teams on the season. The game will conclude a stretch of three games in five days with the Reign after back-to-back matchups with the Los Angeles Kings AHL affiliate last weekend in Tucson. The Roadrunners and Reign have seen some high-scoring battles this season, with the six combined goals in Sunday’s contest representing the lowest total on the season. Saturday’s 6-5 Roadrunners victory was the fourth time in the first six meetings that Tucson and Ontario combined for double-digit goals.

The Roadrunners hosted the Ontario Reign for a pair of games last Saturday and Sunday at the Tucson Arena, as part of Roadrunners Fight Cancer Weekend. The team wore special hot pink jerseys for both games during the weekend, which were auctioned off after the series finale Sunday. The auction raised nearly $25,000 with all proceeds going to Banner Health University of Arizona Cancer Center. Fans brought their pink to the rink all weekend and filled out “I Pink For” signs claiming who they fight for in the battle against cancer.

Over the Roadrunners last three Saturday night contests at the Tucson Arena, a total of 15,305 fans have filled the stands for three thrilling come-from-behind victories. The stretch began with Star Wars Night on January 29, when a force of 5,323 fans saw the Roadrunners overcome a 2-0 deficit in the third period to force overtime against Bakersfield, before Ben McCartney buried the game-winner 50 seconds into the extra period. Three weeks later, 5,502 fans kicked off Kids Weekend with the largest crowd since November 9, 2019, as Tucson tallied back-to-back power-play goals in the third period to snag a 4-3 victory over Henderson. Finally, February 26 saw fans join the fight for Roadrunners Fight Cancer Weekend as Tucson won a high-scoring affair with Ontario backed by Michael Carcone’s second hat trick of the month.

Forward Mike Carcone kicked off Roadrunners Fight Cancer Weekend with his second hat trick in the month of February and fifth of his AHL career. Carcone gave the Roadrunners each of their three leads in last Saturday’s 4-3 victory, including the go-ahead goal 4:18 into the third period. The 25-year-old reached 21 goals on the season with the performance, the most by a Roadrunner since the 2019-2020 season. Carcone is on pace to set a new Roadrunners franchise record for goals in a season which currently stands at 23, with Lane Pederson (2018-2019), Mike Sislo (2017-2018), and Michael Bunting (2017-2018) all collecting 23 goal seasons. With 21 goals in 41 games played this season, Carcone has the next 17 outings to become the fastest Roadrunner to reach the current record, as Sislo took 59 games to do in the 2017-2018 campaign.

The Arizona Coyotes announced Monday morning that they had recalled forward Matias Maccelli from the Tucson Roadrunners. The 21-year-old has 55 points (14g 41a) in 42 games with Tucson this season. He leads the Roadrunners in multiple-point performances this season with 14, including four in the span of six games from February 5 to 19. He currently ranks third in the American Hockey League for assists and total points, while leading all rookies in both categories.

Maccelli’s first appearance for the Coyotes will mark his NHL debut, making him the seventh player to make his NHL debut from the Tucson Roadrunners this season. It would also make him the 13th player to play for both the Roadrunners and Coyotes this year. He’ll become the third Tucson forward and fourth AHL rookie to make their debut, joining Ben McCartney, JJ Moser, Vladislav Kolyachonok, Cam Dineen, Dysin Mayo and Michael Carcone. The soonest Maccelli could make his debut with the Coyotes is Thursday, March 3, as they’ll host the Colorado Avalanche at Gila River Arena.

The Roadrunners concluded their February schedule last Sunday at the Tucson Arena with their tenth and final game of the month. Tucson scored four or more goals in four of their ten games dating back to February 4 and tied a season-high for most wins in a month. The Roadrunners posted three goals in a single period four times against four different opponents, as well as a pair of hat tricks by Michael Carcone. Matias Maccelli led the team in multiple-point performances during the month with six, closely followed by Carcone with five. The Roadrunners boasted their second highest goals scored (29) in February, with 11 of the goals scored by Carcone.

Over the four-game home stand against the Henderson Silver Knights and Ontario Reign, the Roadrunners tallied four power-play goals. During the third period of a 4-3 comeback victory on Saturday, February 19, Tucson netted back-to-back goals on the man-advantage to take the final lead of the contest. The Roadrunners scored ten power-play goals in as many games during the month of February, with Mike Carcone recording four of them to lead the team.

Empey And Lacroix Drop The Gloves

Tucson forward Tyson Empey got into a fight with Ontario’s Jacob Doty in the series finale last Sunday, marking the fourth fight for the 26-year-old since the start of 2022 and seventh on the season overall. Forward Cedric Lacroix also got into a bout with Doty in Saturday’s series opener for his third fight since joining the roster on January 8 against the Colorado Eagles. His exchange with Doty came just 2:40 into the first period on Saturday, his fastest to start a contest this season.

Tucson forward Ben McCartney buried his tenth goal of the season in last Saturday’s 4-3 win over the Ontario Reign, becoming the fifth Roadrunner to tally double-digit goals and assists on the season. McCartney is the second rookie to accomplish the feat this season, after Matias Maccelli netted his tenth goal on January 22 against the Reign in Ontario. McCartney is also one of four Roadrunners to record a hat trick this season, as the 20-year-old scored the first of his AHL career on October 23, 2021 against Texas.