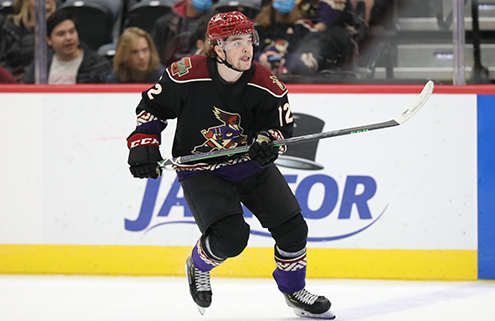 Tucson, Arizona – The Arizona Coyotes announced Monday morning that they had recalled forward Matias Maccelli from the Tucson Roadrunners. The 21-year-old had 55 points (14g 41a) in 42 games with Tucson this season at the time of his recall. He currently ranks third in the American Hockey League for assists and total points, while leading all rookies in both categories.

The Turku, Finland, native was drafted in the fourth round (#98 overall) by the Arizona Coyotes in the 2019 NHL Entry Draft. He leads the Roadrunners in multiple-point performances this season with 14, including a five-point performance and his first AHL hat trick on November 12 against Ontario in an 8-4 win. Maccelli has eight three-point or more performances this season with Tucson, four of which were accomplished in the span of six games from February 5 to February 19.

After posting a point per-game average in his first 21 games, Maccelli has exploded since the start of the 2022 calendar year with 34 points in his last 21 appearances. The top-line playmaker for Tucson did not go back-to-back contests without a point since mid-December and boasts more multi-point outings (14) than games without a point (13).

Maccelli’s first appearance for the Coyotes will mark his NHL debut, making him the seventh player to make his NHL debut from the Tucson Roadrunners this season. He’ll join fellow AHL rookies Ben McCartney, JJ Moser and Vladislav Kolyachonok, along with Cam Dineen, Dysin Mayo and Michael Carcone to have played their first NHL game during the 2021-2022 season and also have played with the Roadrunners in 21-22. His NHL debut will make him the 13th player to play for both the Roadrunners and Coyotes this season. The Coyotes are next in action when they host Colorado on Thursday.

Tucson Roadrunners Road Ahead: Reign On The Road
Scroll to top