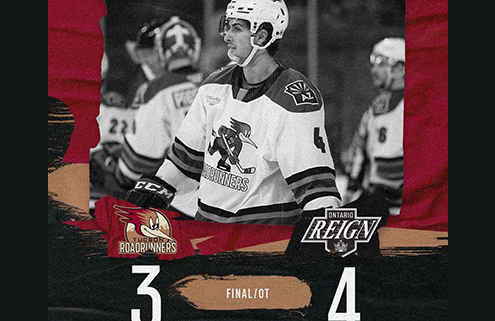 Ontario, California – The Tucson Roadrunners opened their five-game road trip with a standings point Wednesday night against the Ontario Reign at the Toyota Arena. Tucson got out to a fast start with their second three-goal first period in the last three games, but the Reign mounted a late comeback to force overtime before netting the game-winner 1:22 into the extra period. Jan Jenik and Cam Dineen notched multiple-point performances with a pair of assists each. Ivan Prosvetov made his fifth-straight start in net for the Roadrunners and stopped 24 shots faced, including a perfect second period.

Mike Carcone made history with his goal to open the scoring 22 seconds into the first period at the Toyota Arena. The score set a new Roadrunners franchise record for the fastest goal to start a game, while extending Carcone’s team lead for goals on the season to 22. The total represents the most goals scored by a Roadrunner in a season since the 2018-2019 campaign and is one behind the franchise record of 23. After the top line got Tucson on the board, the second line kept it going with a goal by Terry Broadhurst 5:27 later to extend the early lead to 2-0. Broadhurst’s score was his fifth on the season and second against the Reign since the start of 2022. The Roadrunners added another goal on their second power-play of the period, scored by Hudson Fasching for his eighth of the season and fourth while on the man-advantage. Fasching’s score capped off the three-goal period for the Roadrunners, their fourth against the Reign this season. Ontario got on the board with 38 seconds remaining in the opening frame to cut Tucson’s lead to 3-1 as the high-scoring first period came to a close. Despite a four-goal first period and three power-plays during the second period, the middle frame came and went without a goal scored by either team. Tucson backstop Ivan Prosvetov turned aside all six shots faced in the frame, the lowest number of shots faced in a period against the Reign since December 18. The Roadrunners continued to play a clean game in the third period up 3-1, staying out of the penalty box for the final 25:16 of regulation. With just under four minutes remaining in the third period, the Reign pulled goaltender Matthew Villalta in favor of an extra attacker. After the Roadrunners led for 59:06, Ontario scored with 1:56 on the clock and again with just 32 seconds remaining to tie the contest at three. Both goals were scored by forward Lias Andersson in his first appearance with Ontario this season on an LTI Conditioning Loan from the Los Angeles Kings. The score remained knotted at three for the final half-minute of regulation, and the Reign and Roadrunners headed to overtime for the second time at the Toyota Arena this season. The Reign completed the comeback 1:22 into the extra three-on-three period when Martin Frk netted his team-leading 28th goal of the season to secure a 4-3 victory for Ontario. The Roadrunners finish 1-1-1-0 in three games over five nights against the Reign who now have the most standings points in the Pacific Division.

Wednesday night marked the Roadrunners first game since January 5 without leading scorer Matias Maccelli. The 21-year-old was recalled by the Arizona Coyotes on Monday after leading all AHL rookies in assists (41) and total points (55). Maccelli was Tucson’s leading scorer against the Reign this season with 16 points (5g 11a), including five multiple-point performances across seven outings against Ontario.

Tucson picks up a point in the effort and will continue their three-game stretch in California Saturday night when they take on the Bakersfield Condors at the Mechanics Bank Arena. Saturday’s contest is slated for an 8:00 p.m. MST puck drop, with coverage beginning at 7:45 p.m. MST on Fox Sports 1450AM with Roadrunners Warm-Up hosted by Jimmy Peebles. Then, “Voice of the Roadrunners” Adrian Denny will have all the action live from Bakersfield.

“I think we played incredibly good hockey for 57 minutes, then found ourselves in a situation where a really talented team was able to pull their goalie. They found the back of the net on an attack then got another on a low play. In that three-on-three period they have some skill that can make a difference and they did. For us it’s a point that we’re able to take away from a really good hockey team. In that situation you want to come away with two points but we’ll go back, regroup, and we’ll get ready for Saturday.”

JENIK AND DINEEN DISH THE PUCK – Forward Jan Jenik and defenseman Cam Dineen each tallied a pair of assists in the first period Wednesday night against the Ontario Reign. Jenik’s performance was his third multiple-point outing in the last five games, and first multi-assist night since December 18 against the Reign in Ontario. Dineen has notched four multi-assist contests since returning to the Roadrunners on January 26 and leads all Tucson defensemen in assists with 15 on the season.

Watch Tucson Roadrunners forward Mike Carcone open the scoring in Wednesday’s matchup with the Ontario Reign with his team-leading 22nd tally of the season. Carcone found the back of the net just 22 seconds into the first period, marking the fastest goal to start a contest in Roadrunners franchise history.

Tucson forward Hudson Fasching netted the third goal for the Roadrunners in the first period of Wednesday’s contest with the Ontario Reign. The goal was Fasching’s eighth of the season and fourth while on the power-play. Tucson recorded the only man-advantage goal of the night, as their penalty-kill went a perfect 3/3 against Ontario’s league-leading power-play unit.

Q and A With Roadrunners Bokondji Imama
Scroll to top