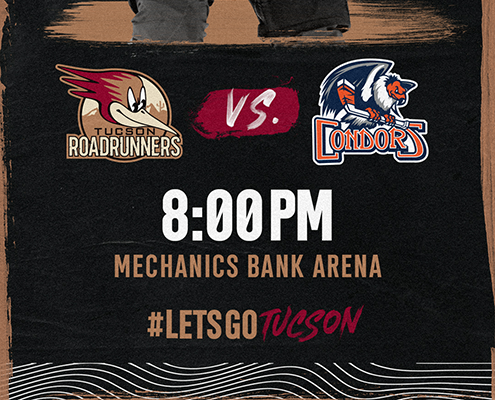 The Tucson Roadrunners will continue their week in California with a Saturday night matchup against the Bakersfield Condors at the Mechanics Bank Arena. The game marks the second trip to Bakersfield for Tucson this season and first since Wednesday, January 19. The Roadrunners will look for their second-straight win against the Condors, after a 3-2 come-from-behind overtime victory in their last matchup on Saturday, January 29. Tucson will also be vying for their third-straight Saturday night win and fifth win in the last six Saturday night. The stretch started with back-to-back Saturday wins over the Bakersfield Condors on January 29 and the San Diego Gulls on February 5, followed by wins over the Henderson Silver Knights on February 19 and the Ontario Reign on February 26.

Three Things
1) The Roadrunners will be taking on the Bakersfield Condors for the fifth time this season and first meeting since January 29 at the Tucson Arena. In that game, the Roadrunners overcame a 2-0 deficit in the third period to force overtime, before Ben McCartney netted the game-winner and his second goal of the contest to give Tucson a 3-2 victory. The other goal was scored by former Condor Cameron Hebig, who has posted five points (2g 3a) in the Roadrunners last two meetings with Bakersfield. Tucson has netted five power-play goals in four matchups with the Edmonton Oilers AHL affiliate this season, including two in the first period on Friday, January 28 by Jan Jenik and Cameron Hebig. In Tucson’s last contest at the Mechanics Bank Arena on January 19, Mike Carcone cashed in on the Roadrunners only man-advantage of the night.

2) Defenseman Cam Dineen and forward Jan Jenik each notched a pair of assists in Tucson’s most recent contest on Wednesday in Ontario. With rookie forward Matias Maccelli in the NHL with the Arizona Coyotes, Jenik and Dineen are the active assist leaders for Tucson with 18 and 15, respectively. Dineen returned to the Tucson roster during the Roadrunners three-game series with the Condors at the end of January, appearing in two games. The 23-year-old scored a power-play goal in the series opener January 26 and added an assist in the series finale on January 29. Dineen posted three multi-assist performances over Tucson’s last road trip, while two of Jenik’s three multi-assist outings have come on the road in California. The 21-year-old Jenik has recorded a goal and an assist in three outings against the Condors this season.

3) Joining the Roadrunners roster for the weekend in California is forward Zack Andruisak. The 23-year-old has recorded 46 points (19g 27a) in 51 games this season with the Idaho Steelheads and Cincinnati Cyclones of the ECHL. In 15 outings since joining the Cyclones, Andrusiak had 10 goals and 13 assists. His first appearance with Tucson will represent his American Hockey League debut. Andrusiak takes a forward spot after the recall of leading scorer Matias Maccelli, who made his NHL debut with the Arizona Coyotes Thursday night in Glendale. The 21-year-old logged 14:45 of ice time alongside linemates Phil Kessel and Alex Galchenyuk. The Coyotes held on for a 2-1 win against the league-leading Colorado Avalanche, with five total players in the lineup that have also played with the Roadrunners earlier this season.

“When we play connected and we’re playing as one, I think that’s what makes us successful. We need each line, and when we’re rolling over each line we can keep hammering away and keep pushing and not let the other team breathe. I think that’s when we stick to our work ethic and keep our identity strong.”

Roadrunners forward Cameron Hebig on what makes the team successful ahead of Saturday’s matchup with the Bakersfield Condors.

Number to Know
22 – The number of goals scored by Roadrunners forward Mike Carcone after he cashed in on the power-play in the first period of Wednesday’s matchup with the Ontario Reign. The goal also came 22 seconds into the contest, setting a new Roadrunners franchise record for fastest score to start a game. Carcone’s 22 goals is the highest single-season total for a Roadrunner since the 2018-2019 season and is one goal away from tying the franchise record at 23. The 25-year-old has set a new career-high for goals in a season and is on pace to become the first player in Tucson franchise history to lead the team in goals for consecutive campaigns.

We’re Doing It Live
Today’s game will be broadcast on AHLtv, as well as on the radio on Fox Sports 1450AM or on the iHeartRadio app. Coverage begins at 7:45 p.m. MST with Roadrunners Warm-Up, as Jimmy Peebles gets you ready for the game before “Voice of the Roadrunners” Adrian Denny has the call at 8:00 p.m. live from Bakersfield.