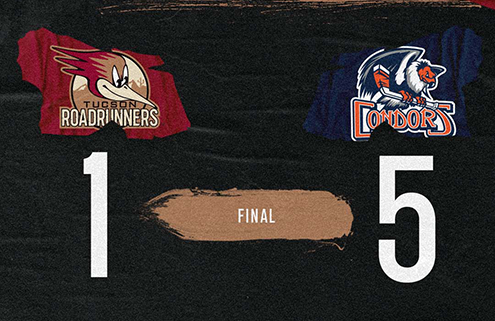 Bakersfield, California – The Tucson Roadrunners continued their week in California with a Saturday night matchup against the Bakersfield Condors at the Mechanics Bank Arena. The Condors jumped out to a 4-0 first period lead as the Roadrunners fell by a score of 5-1. The goal for Tucson was scored by defenseman Doyle Somerby, his first of the season. Josef Korenar started in net for the Roadrunners and recorded seven saves in the first period. Ivan Prosvetov was between the pipes for the final two periods, and stopped all 23 shots he faced as he and Korenar held the Condors scoreless for a combined 41:06 during the contest.

Watch Tucson Roadrunners defenseman Doyle Somerby unleash a blast from the point for his first goal of the season Saturday night against the Bakersfield Condors. Somerby has put together a solid stretch over the last month, tallying five points (1g 4a) in his last seven contests.

IVAN SHUTS THE DOOR – Tucson Roadrunners goaltender Ivan Prosvetov was in net for the final two periods of Saturday’s contest with the Bakersfield Condors. Prosvetov stopped all 23 shots faced to hold the Condors scoreless for his 36:25 of ice time. His 23 saves marks the most against Bakersfield this season in four appearances, and second-most saves without a goal allowed.

Tucson Roadrunners forward Boko Imama gears up to fight with Bakersfield’s Vincent Desharnais. The pair exchanged blows with 4:30 gone by in the first period, marking the first penalties of the game. Desharnais previously fought against Tucson’s Travis Barron back on Friday, January 28, in the Old Pueblo.

“I feel really bad for [Korenar], he’s been in a couple nights now where we haven’t started on time and we’ve left him out to dry. We owe him a lot better. But [Prosvetov] comes in and he’s so big and so athletic, and he comes across and makes a couple of big saves. He keeps us in it and keeps us confident. He’s done a heck of a job the past couple weeks just being big in net and making some saves when we really need him to.”

The Condors built a quick lead on their home ice, with a goal 14 seconds into the opening period to take a 1-0 advantage. They added to the early lead with a score less than two minutes later. The action then shifted to a fight between Tucson’s Boko Imama and Bakersfield’s Vincent Desharnais with 4:30 gone by in the frame. The Condors held onto the momentum after the bout, with a goal less than three minutes later to make it a 3-0 advantage after the first 7:26 of the contest. With less than two minutes still to play in the period, Bakersfield added another goal to make it a 4-0 lead at the first intermission. Tucson got on the board with 1:07 gone by in the second period, when Doyle Somerby sent a blast in from the point for his first goal of the season. The goal was assisted by Travis Barron, who became the tenth Roadrunners to record ten assists on the season. Despite three combined power-plays between the Roadrunners and Condors, the rest of the second period was without a goal, and Tucson entered the third trailing 4-1. Ivan Prosvetov was between the pipes for the Roadrunners for the entire middle frame and produced a perfect period with all ten shots turned aside. Prosvetov continued to shut the door on any Bakersfield attempts to extend their lead in the third, stopping all 13 shots faced in the period before he was pulled in favor of an extra attacker. The Condors cashed in on the empty net with 47 seconds left in regulation to seal a 5-1 win.

Tucson wraps up their weekend in California with a Sunday night matchup against the San Jose Barracuda at the SAP Center. Sunday’s contest is scheduled for 6:00 p.m. MST, with coverage beginning at 5:45 p.m. MST on Fox Sports 1450AM with Roadrunners Warm-Up hosted by Jimmy Peebles. Then, “Voice of the Roadrunners” Adrian Denny will have all the action live from San Jose.