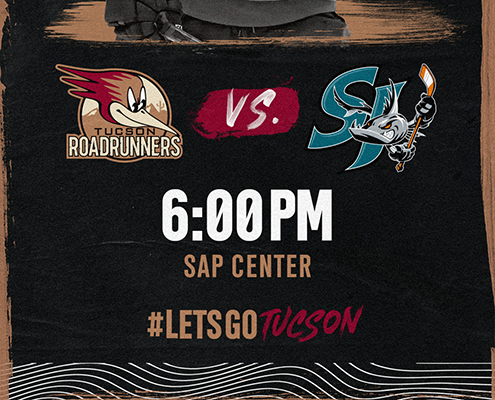 The Tucson Roadrunners wrap up their week in California Sunday night at the SAP Center in San Jose when they take on the Barracuda at 6:00 p.m. MST. The game begins a stretch for Tucson where four of their next six contests are against San Jose. The final three meetings with the Barracuda on the season will take place at the Tucson Arena from Wednesday, March 16 to Saturday, March 19. The season series with the San Jose Sharks AHL affiliate is currently even at one win apiece, after a pair of games at the SAP Center January 12 and 14.

Three Things
1) The Roadrunners will be facing on the Barracuda for the third time this season Sunday night, with all three matchups taking place at the SAP Center in San Jose. Tucson won the first meeting of the season with the Barracuda on January 12. The Roadrunners trailed 2-1 late in the third period but rallied back with three goals in the final seven minutes to secure a 4-3 victory. Two of the four goals were scored on the power-play, including the eventual game-winning goal by Blake Speers with 1:23 left in regulation. Tucson held the Barracuda to a combined 47 shots and three goals each game across the first two matchups.

2) Leading the Tucson active roster for points per-game are Cam Dineen (1.00), Jan Jenik (.87) and Mike Carcone (.84). The trio were kept off the scoring sheet in Saturday’s matchup with the Bakersfield Condors, marking only the third time this year all three appeared in a game without recording a point. In both previous instances, the Roadrunners won their next game with at least three goals scored. In six of their last seven games after being held to a goal or less, Tucson has rebounded in the next game with at least three goals scored. On an individual level, Dineen hasn’t been held scoreless in two-straight outings all season, while Carcone hasn’t gone two-straight games without a point since mid-December and Jenik has only done so once since November.

3) The Roadrunners were perfect on the penalty-kill for the third time in three games Saturday night against the Bakersfield Condors. Tucson shut down both Bakersfield power-plays to improve to 9/9 in their last three games. The stretch is the second time this season the Roadrunners have been perfect on the PK in at least three-straight games, after Tucson went a combined 11/11 across four consecutive games against the Ontario Reign, Stockton Heat and Colorado Eagles from December 18 to January 8. The Roadrunners fended off all four of San Jose’s trips to man-advantage in their first meeting of the season on January 12.

“It’s exciting to be back. It’s nice to get an opportunity to help these guys win, show what I can do, and maybe put my foot in the door for next year. It’s been exciting and I’m happy to be back.”

Roadrunners defenseman Andrew Nielsen on joining the Tucson roster for the first time since the 2020-2021 preseason. Nielsen has appeared in four-straight games dating back to February 26 against Ontario.

Number to Know
23 – The number of saves made by goaltender Ivan Prosvetov in the final two periods of Saturday’s game with the Bakersfield Condors. Prosvetov held the Condors scoreless for his 36:25 of ice time, including a pair of Bakersfield power-plays in the second period. The outing was Prosvetov’s third appearance without allowing a goal this season, after back-to-back shutouts to start the season October 15 against Stockton and October 23 against Texas.

We’re Doing It Live
Tonight’s game will be broadcast on AHLtv, as well as on the radio on Fox Sports 1450AM or on the iHeartRadio app. Coverage begins at 5:45 p.m. MST with Roadrunners Warm-Up, as Jimmy Peebles gets you ready for the game before “Voice of the Roadrunners” Adrian Denny has the call at 6:00 p.m. live from the SAP Center.