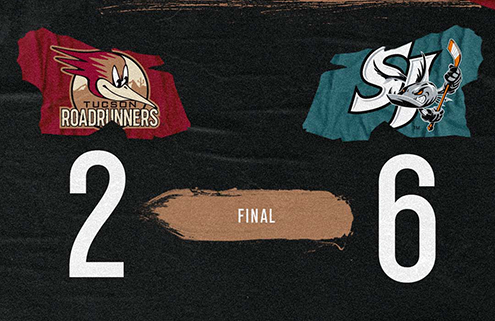 San Jose, California – The Tucson Roadrunners capped off a stretch of three games in five nights across the state of California Sunday night, as they took on the San Jose Barracuda at the SAP Center for the third time this season. The Roadrunners had goals from Mike Carcone and Matt Foley with Foley’s erasing a 2-1 third period deficit, but fell to the Barracuda by a score of 6-2. Carcone’s goal marked his team-leading 23rd of the year to match the franchise record for most in a season, while Foley’s was the first goal of his American Hockey League career. Ivan Prosvetov was in net for the Roadrunners and stopped 23 of 25 shots through the first 40 minutes of play.

Watch Tucson Roadrunners defenseman Matt Foley find the back of the net in the third period of Sunday’s contest with the San Jose Barracuda. The goal was Foley’s first in the American Hockey League and tied the game up at 2-2 in the early goings of the third period. Forward Cedric Lacroix tallied the primary assist for his first point of the season.

MIKE MATCHES THE RECORD – Tucson Roadrunners forward Mike Carcone opened the scoring for the Roadrunners in the first period of Sunday’s matchup with the San Jose Barracuda. The goal was Carcone’s team-leading 23rd of the season, tying a franchise record for most goals in a season. The 25-year-old becomes the fourth Roadrunner to reach 23 goals and the third “Mike” to hold the record, shared by Michael Bunting (2017-2018), Mike Sislo (2017-2018), and Lane Pederson (2018-2019).

Tucson Roadrunners defenseman Matt Foley skates down the line after scoring his first American Hockey League Sunday night against the San Jose Barracuda. The game was Foley’s tenth as a Roadrunner and first against the Barracuda. The 26-year-old has a goal and an assist with Tucson since joining the team on January 5.

“I thought we got off to a really good start at the beginning of the third. We had a number of good shifts leading to the goal, and right after we put the pressure on them. At that point, it looked good for us but it’s hard to make that breakthrough. We need to stick with it for a full 20 minutes there in the third period and not just go all-in on the first couple minutes and hope that’s enough.”

Roadrunners defenseman Matt Foley on Tucson’s performance in the third period. The Roadrunners opened the frame with a goal by Foley 2:26 in, but the Barracuda rallied back to come away with the win.

Tucson got back on track in terms of first period scoring with a goal 3:42 into the opening frame. The goal was scored by Mike Carcone for his 23rd of the year. The goal matched a Roadrunners franchise record for most in a season shared by three previous Tucson skaters, including forward Lane Pederson who appeared in the game as a member of the Barracuda. San Jose evened up the score 3:58 later with their first goal of the contest. Each team took one trip to the power-play, but the score remained even at one at the end of the first period. The middle frame began with a fight between Tucson’s Boko Imama and San Jose’s Steenn Pasichnuk, for Imama’s second bout in as many nights. The Barracuda grabbed their first lead of the night just before the midway point of the second period, with a power-play goal by former Roadrunner Lane Pederson. Tucson quickly went to work in the third period, tying the game up at 2-2 just 2:26 into the final frame. The goal was scored by Matt Foley for his first AHL score, assisted by Cedric Lacroix for his first assist of the season. San Jose quickly took the lead with 5:07 gone by into the third period as their other former Roadrunner, Nick Merkley, tallied his tenth goal of the year. The Barracuda cashed in on the power-play for the second time in the contest to extend their lead to 4-2 with 7:31 still to play in regulation. San Jose’s John Leonard added a pair of goals in the final 3:04 of the contest to secure the 6-2 win and complete the hat trick on home ice.

The Roadrunners have a week of practice before they head to the Lone Star State for a pair of games with the Texas Stars Friday, March 11 and Saturday, March 12. Both matchups are scheduled for 6:00 p.m. MST, with coverage beginning at 5:45 p.m. MST on Fox Sports 1450AM with Roadrunners Warm-Up hosted by Jimmy Peebles. Then, “Voice of the Roadrunners” Adrian Denny will have all the action live from the H-E-B Center in Cedar Park, Texas.