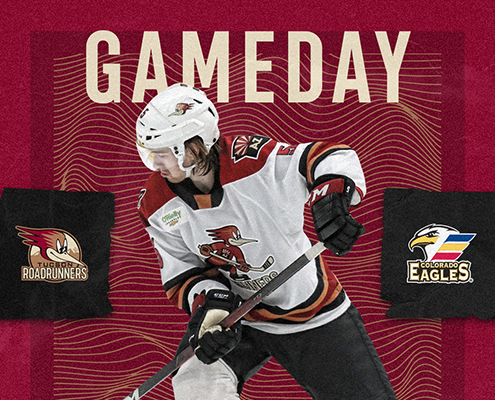 The Roadrunners are on the road again, this time in Colorado to face the Eagles in a three-game series. Game 1 of the series is Wednesday night at 7pm. The Roadrunners are third in the AHL Pacific Division in points, goals scored, and goal differential. Tucson is first in the division for goals per game with four.

1) The Roadrunners are the last remaining undefeated team in the AHL’s Pacific Division, after the Henderson Silver Knights and San Diego Gulls each suffered their first losses of the season last week. Henderson and San Diego will be facing off throughout this weekend at the Orleans Arena in Las Vegas.

2) The Roadrunners posted standings points in five of ten games and a 4-5-0-1 record against the Colorado Eagles last season, including a two-game series sweep December third and fourth at Tucson Arena. Colorado is 1-3-1 this season and currently sits fifth in the AHL’s Pacific Division.

3) The Roadrunners have a few “new” additions to their roster for this series, as defenseman Kyle Capobianco and forward Barrett Hayton have been assigned to Tucson by the Arizona Coyotes. Capobianco was an AHL All-Star with the Roadrunners last season for the third-straight campaign, notching 37 points in 42 games. Barrett Hayton appeared in five games with the Roadrunners last season on a conditioning assignment, scoring a goal and dishing out 4 assists, including two in a game against Colorado in February.

Roadrunners forward Tyler Steenbergen on keeping the winning streak alive as the Roadrunners travel to Colorado.

“We want to keep our streak going, obviously we know [Colorado] is pretty good so heading into the weekend we just want to keep putting our foot forward and keep on playing some good hockey.”

Number to Know
65 – The number of seconds the Roadrunners have been trailing through four games this season, all of which came during the first period of Tucson’s 5-3 over San Jose on February 8.

We’re Doing It Live
Roadrunners Hockey returns to the radio today at 7 p.m. as “Voice of the Roadrunners” Adrian Denny brings you all of the action on Fox Sports 1450 AM and the iHeartRadio app. Roadrunners Warm Up begins our coverage at 6:45 p.m. each night this week. All Roadrunners games are broadcast live on Tucson’s Sports Station with AHL TV joining the action as well.