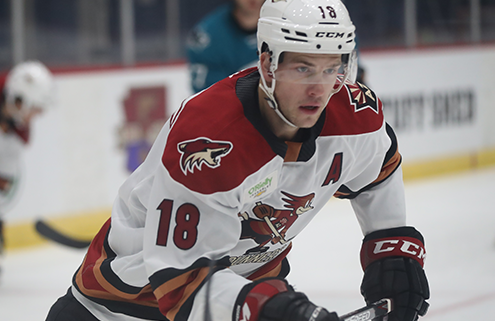 Where We Stand
The Roadrunners are currently 4-0-0-0. They are first in goals-per-game averaging four a contest. Tucson is the last remaining undefeated team in the Pacific Division after the Henderson Silver Knights and San Diego Gulls both lost their first games of the season last week. The Roadrunners have scored 14 goals in their last three games, most in a three-game span since December 31 – January 4 of last season (16 goals).

On the Road Again
The Roadrunners are back on the road, this time in Colorado for a three-game set with the Eagles, starting with the series opener on Wednesday, February 24 at 7pm. The game is available on Fox Sports 1450 am, the iHeartRadio app, and AHLtv.

Who’s on the Schedule
The Roadrunners will be facing the Colorado Eagles this week for the first time this season. The Eagles are currently 1-3-1 and sitting at fifth in the Pacific Division. They currently have a goal differential of -5 (12 for, 17 against).

Smereck Supports His Community
The Roadrunners are currently auctioning off a 2019-2020 Jalen Smereck Game Worn jersey to benefit Detroit Ice Dreams, an organization that he works closely with in his hometown of Detroit, Michigan. The auction goes through the weekend at TucsonRoadrunners.com/Dreams. CLICK HERE to bid. (CLICK HERE for more)

Around the Pacific Division
The Roadrunners are third in goals for and goal differential and are second in goals allowed. San Diego and Henderson are the only teams in the division with more wins than the Roadrunners, and each have one loss apiece. They are facing off against each other this week at the Orleans Arena in Las Vegas.

Did You Know?
The Roadrunners have a player born in every year from 1993 to 2001, with Barrett Hayton joining the team as the third youngest, behind Jan Jenik (September 2000) and Victor Soderstrom (February 2001).