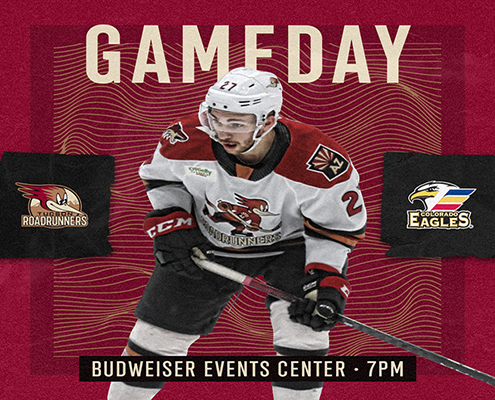 The Roadrunners continue their road series with the Colorado Eagles Friday night at 7pm. Tucson will be vying for their fifth win of the season, while the Eagles will be going for their third victory of the season, and their second in a row at home.

1) The Roadrunners were a perfect four for four on the penalty-kill Wednesday night versus Colorado, and one for two on the power-play. Victor Soderstrom sent a shot from the blue line to the back of the net in the second period. Michael Bunting and Lane Pederson assisted on the goal, extending their point streaks to four games.

2) The Roadrunners have not lost two straight games against the same team on the road since March 2 and 3 of 2019. Tucson went the entire 2019-20 season without losing two in a row at the same opposing arena. They will look to avoid doing so against the Eagles Friday night.

3) The Arizona Coyotes came back to win from a 3-0 deficit in two straight games versus the Anaheim Ducks in Glendale this week. This marks the eighth time in NHL history since 1979 where a team has come back from trailing 3-0 in two consecutive contests, and only the second time where both wins came against the same team.

“Last game we had too many turnovers that hurt us, and we got tired when we were in the zone for too long, so I think fixing those and getting the puck down deep and going from there.”

27 – The number of players on the Roadrunners roster after defenseman Kyle Capobianco and forward Barrett Hayton were assigned to Tucson by the Arizona Coyotes.

We’re Doing It Live
Roadrunners Hockey returns to the radio today at 7 p.m. as “Voice of the Roadrunners” Adrian Denny brings you all of the action on Fox Sports 1450 AM. From here on out, all Roadrunners games will be broadcast live on Tucson’s Sports Station with AHL TV joining the action for the regular season continuing on February 26.