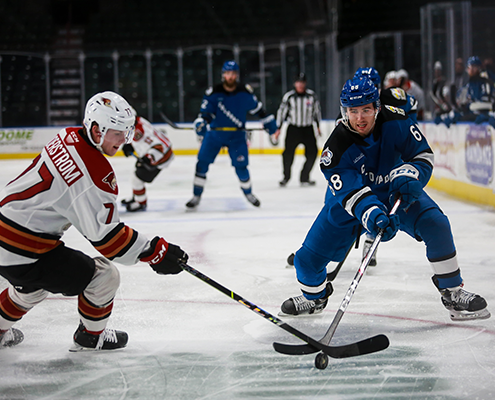 Loveland, Colorado – The Roadrunners continued their road series with the Colorado Eagles Friday night, narrowly coming out with a 4-3 overtime victory after trailing 3-1 with two minutes to go in regulation to earn their fifth win of the season.

The Roadrunners were once again on the penalty-kill early in the first but were able to hold off the Eagles. Kevin Roy emerged from the penalty box and buried the puck in the back of the net to give Tucson a 1-0 lead. Michael Bunting and Lane Pederson extended their point streaks to five games each with assists on the goal. Colorado got on the board in the waning minutes of the first period to send the teams to the locker rooms tied at one at the first intermission. Colorado scored twice in the span of seventeen seconds midway through the third to give Colorado their second 3-1 lead in as many games. It looked like there could be a repeat of Wendesday night’s score, but two tallies by the Roadrunners in the final two minutes of regulation prevented that and sent the game to overtime. Tucson would have certainly been happy with one point in the standings, but they still wanted more. With fifteen seconds to go in the overtime period, Kevin Roy threaded through the Colorado defense to slip the puck past Eagles goaltender Peyton Jones. Tucson earns their third overtime victory of the season, and fifth win overall. Roadrunners goaltender Ivan Prosvetov kept Tucson in the game, making 35 saves on 38 shots. Tucson improves to 5-1 for the second straight year with tonight’s win.

The Roadrunners continue their road series against the Eagles Saturday night, February 27th at the Budweiser Events Center in Loveland, Colorado, at 7:00 p.m. You can listen to the game in Tucson on FOX 1450 AM and on the iHeart Radio app or watch the game on AHL TV.

“That was a character win! Lots to learn from that game. Boys got back to solving problems, they stuck together and found a way.”

Roadrunners head coach Steve Potvin after the game on his team’s comeback victory Friday night against the Colorado Eagles.

Kevin Roy celebrates after scoring the first goal of the game Friday night against Colorado, his second of the season. Roy would go on to score the overtime winner with fifteen seconds to go in the extra period for his third.