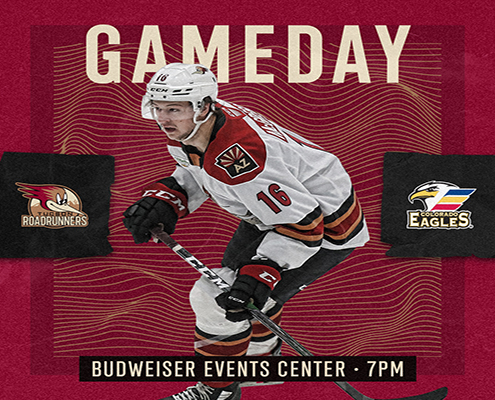 The Roadrunners continue their road series with the Colorado Eagles Saturday night at 7pm, looking to win two out of three over the Eagles. Tucson improved to 5-1 for the second straight season Friday with a 4-3 overtime victory, thanks to two goals in the final two minutes of regulation, followed by an overtime game-winner from Kevin Roy.

1) Roadrunners forward Kevin Roy tallied two goals in Friday night’s overtime win, including the deciding tally with less than fifteen seconds left in sudden-death. Roy is new to Tucson this season, having split last season between the Springfield Thunderbirds and the Wilkes-Barre/Scranton Penguins. Roy now has four goals and four assists in five games with the Roadrunners.

2) Tucson veterans Michael Bunting and Lane Pederson each extended their point streaks to five games Friday, with each recording an assist on a different Kevin Roy goal. They’re each tied for the AHL lead in points with nine, and Pederson is tied for second in assists with seven.

3) Roadrunners netminder Ivan Prosvetov is now tied for most wins in the AHL with five and has done so in two less games than San Diego Gulls backstop Lukas Dostal, the only other goaltender with five wins. Prosvetov is fourth in total saves with 191 stopped shots.

“When we got to the third period, our game plan was just ‘let’s keep it simple, let’s get pucks behind their defense and let’s go to work and make them make mistakes,’ and we did that and got the job done.”

Number to Know 14 – The number of seconds remaining on the clock when Tucson defenseman Kyle Capobianco scored from the blue line to send Friday night’s contest to overtime, and the amount of time remaining in overtime when Kevin Roy slipped through the three-on-three Colorado defense to score the game-winning goal for the Roadrunners.