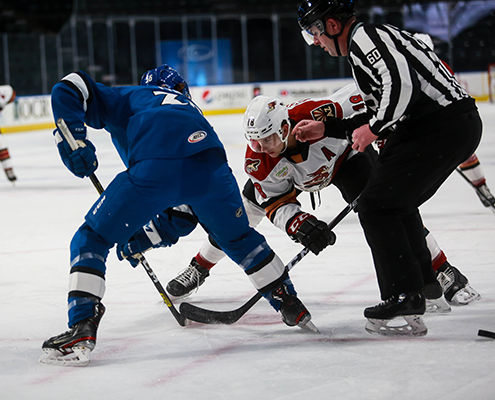 Loveland, Colorado – The Tucson Roadrunners wrapped up their road series with the Colorado Eagles Saturday night, suffering their second loss of the season, after conceding the lone goal six minutes into the first period.

Colorado opened up the scoring with a goal by Mike Vecchione less than six minutes into the first period, his first of the season. Despite several scoring chances for both teams, the final 54:06 would be without another goal, and Colorado would make out with a 1-0 win. Tucson was held scoreless for the first time all season, with all 20 shots on goal being turned away. Eagles rookie goaltender Trent Miner earned his first AHL shutout. Connor LaCouvee made his first start in net for Tucson, making 36 saves on 37 shots, including some breakaway saves that kept the Roadrunners in the game. The Roadrunners drop to 5-2 on the season, while Colorado improves to 3-3-2-0. These two teams won’t face off again until April 22 in Tucson, in another three-game set.

The Roadrunners return home for a three-game series with the Texas Stars. Game one will be Wednesday night, March 3rd at the Tucson Convention Center at 7:00 p.m. You can listen to the game in Tucson on FOX 1450 AM and on the iHeart Radio app or watch the game on AHL TV.

“Our penalty-kill was very strong tonight, and [Connor] LaCouvee made big saves. Unfortunately, we shied away from shooting the puck and took far too many penalties.”

Roadrunners head coach Steve Potvin after the game on his takeaways from Saturday night’s 1-0 defeat to Colorado.

POTENT PENALTY-KILL – The Roadrunners were a perfect five-for-five on the penalty-kill Saturday night against Colorado, improving to 24/26 on the season, tied for second-best in the AHL with Hartford. Their 18.2 power-play percentage ranks first in the AHL Pacific Division as well.

Connor LaCouvee made his first start at goaltender for the Roadrunners Saturday night against Colorado. LaCouvee stopped 36 of the 37 shots he faced, including this save on the breakaway in the first period.

Victor Soderstrom uncorks a shot against the Colorado Eagles Saturday night in Loveland. Soderstrom had his first AHL goal Wednesday against the Eagles, a power-play goal in the second period. Soderstrom is the youngest player on the Roadrunners roster, and the only player born in the year 2001 or later.