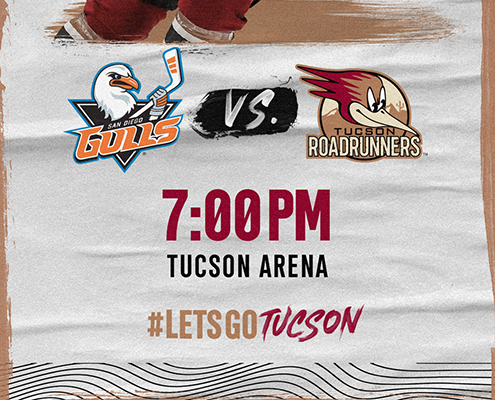 The Roadrunners close out the 2021-2022 season Friday night at the Tucson Arena, as they’ll host the San Diego Gulls for the second-straight night. Tucson took the series opener by a score of 6-2 with a four-goal second period. A Roadrunners win in regulation Friday night will secure the I-8 Border Cup Trophy for the fifth-straight year. Tucson has ended their regular season against the Gulls in four of their last five seasons.

Three Things
1) The Roadrunners enter Friday night with a chance to sweep their I-8 Border Rivals over the final two games of the regular season for the first time for either team since the 2017-2018 campaign, when the Roadrunners took two-straight contests April 13 and 14 to end the year. Tucson enters the series finale with a 2-0 record in the second game of a back-to-back series against San Diego this season. The Roadrunners have had a player tally a hat trick in each of their previous game twos against the Gulls: Hudson Fasching at home on October 30, 2021 and Mike Carcone in San Diego on February 5, 2022. In Tucson’s final meeting with the Gulls last year, the Roadrunners put up a season-high nine goals in a dominant 9-2 road victory on May 1, 2021.

2) Back at the Tucson Arena in Thursday’s series opener were Roadrunners standout forwards Jan Jenik and Matias Maccelli. Jenik returned to the Tucson lineup after three games in the NHL with the Arizona Coyotes. The 21-year-old tallied his first career NHL assist against the St. Louis Blues on Saturday, April 23 on a JJ Moser goal. Maccelli took the ice at the Tucson Arena Thursday night for the first time since February 27 and extended his home scoring streak to six outings with a pair of assists. The 21-year-old appeared in 23 games with the Arizona Coyotes since his NHL debut on March 3 and recorded six points (1g 5a) in his first National Hockey League stint.

3) Aside from clinching the I-8 Border Cup Trophy over San Diego with a regulation victory Friday night, several Roadrunners players have individual milestones they could reach in the season finale. Forward Cam Hebig and defenseman Cam Crotty have the chance to become the first Roadrunners to appear in all 68 games of a season since Mike Sislo in 2017-2018, and the fifth and sixth players in Tucson franchise history. Meanwhile, forward Ben McCartney could reach 35 points in his first full season with a point in Friday’s finale and could reach 20 goals on the year with a two-goal performance.

Roadrunners forward Colin Theisen on his development since joining the Roadrunners from Arizona State University. In 15 games with Tucson, Theisen has notched 11 points (5g 6a) with three multiple-point performances. The 25-year-old recorded a goal and two assists in Thursday’s series opener against San Diego.

Number to Know
4 – The number of goals scored by the Roadrunners in the second period of Thursday’s 6-2 victory over the San Diego Gulls. The frame marked the second four-goal period for Tucson this season, as the Roadrunners scored six goals against San Diego for the second time on the year. With the win, Tucson improved to 12-1-1-0 when scoring at least three goals in a frame, as well as 9-1-1-0 on home ice with at least four days of rest.

We’re Doing It Live
Tonight’s game will be broadcast on AHLtv, as well as on the radio on Fox Sports 1450AM or the iHeartRadio app. Coverage begins at 6:45 p.m. MST with Roadrunners Warm-Up, as Jimmy Peebles gets you ready for the game before “Voice of the Roadrunners” Adrian Denny has the call at 7:00 p.m. live from the Old Pueblo.