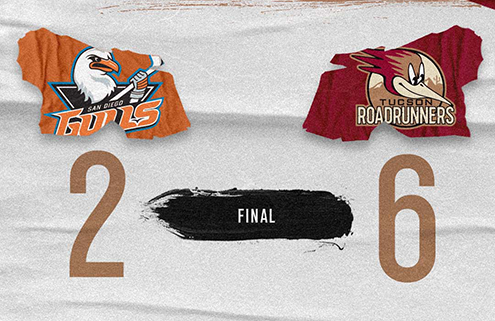 Tucson, Arizona – The Tucson Roadrunners kicked off the final series of the 2021-2022 season Thursday night by hosting the San Diego Gulls for the first of back-to-back contests at the Tucson Arena. After trailing 1-0 at the first intermission, the Roadrunners rallied back with a four-goal second period to defeat their I-8 Border Rivals by a score of 6-2. Six different Tucson skaters lit the lamp, as netminder Rasmus Korhonen stopped 16 of 18 shots faced on the other end to improve to 2-0 this year at the Tucson Arena.

Watch Tucson Roadrunners forward Colin Theisen begin a stretch of four unanswered goals in the second period for Tucson with his fifth time lighting the lamp this season. Theisen’s goal tied the contest at 1-1 with 25 seconds gone by in the middle frame and was the first of three points he recorded (1g 2a) in Thursday’s 6-2 victory over San Diego. The 25-year-old has tallied 11 points (5g 6a) in 15 games since joining the Roadrunners from Arizona State University.

MULTIPLE POINTS FOR MANY – The Roadrunners had four players notch multiple-point performances in Thursday’s series opener win over the San Diego Gulls. Leading the way was forward Colin Theisen with his third multi-point night (1g 2a) in 15 games with Tucson. Also tallying multiple points were Stephen Harper with his first such performance of the season (1g 1a), Cameron Hebig with his fifth multi-point outing (1g 1a), and Matias Maccelli with his team-leading 15th (2a).

Forward Jan Jenik returned to the Roadrunners roster ahead of Thursday night’s matchup with the San Diego Gulls, after last appearing with Tucson on Friday, April 22. Jenik was assigned to the Roadrunners from the Arizona Coyotes Thursday afternoon after appearing in a pair of contests with the Coyotes in Minnesota and Dallas. Jenik extended his active AHL point streak to five games with a third-period assist Thursday night against the Gulls. The 21-year-old has recorded eight points (1g 7a) during the streak and has 12 points (2g 10a) in his last nine outings overall with Tucson.

“I thought we played hard, and the guys did a fantastic job. I thought we limited scoring chances and were able to create some offense out of that.”

After a scoreless opening frame when these teams last met on Saturday, April 23, Thursday’s first period was without a goal for only the opening 10:58 of play. The scoring was started when San Diego jumped out to a 1-0 lead with a four-on-four goal by Alex Limoges. The goal marked the only scoring of the first period, as each team was held to just six shots on goal through the first 20 minutes of play. The Roadrunners evened the score at 1-1 25 seconds into the middle frame with a goal by Colin Theisen, his fifth in 15 games with Tucson. The goal came on the first shot of the second period by either team. The Roadrunners took their first lead of the night at 2-1, as Travis Barron netted a shorthanded goal on a two-on-one feed from Cameron Hebig with 7:55 still to go in the middle frame. Tucson extended their lead to 3-1 a minute and 31 seconds after Barron’s shorthanded strike with the tenth goal of the season for Terry Broadhurst. Broadhurst’s score marked the Roadrunners 15th time scoring at least three goals in a period this season, but Tucson wasn’t finished. With 2:20 remaining in the middle frame, Ty Emberson capped off the second four-goal period for the Roadrunners on the year by scoring his fourth goal of the season. After allowing four-straight goals to begin the period, San Diego cut the deficit to 4-2 with a goal in the final 52 seconds of the frame. Leading by a pair of goals, the Roadrunners shifted their focus in the third period to managing the puck and limiting scoring chances for San Diego. That’s exactly what they did as they held the Gulls to just four shots in the first 16 minutes of the final frame. Tucson added an insurance goal by forward Stephen Harper with 5:47 remaining in regulation, marking Harper’s third goal of the season and Jan Jenik’s 30th assist of his sophomore campaign. A sixth and final goal for the Roadrunners by Cameron Hebig secured the victory over the Gulls in Thursday’s series opener.

The Roadrunners will wrap up the 2021-2022 season Friday night at the Tucson Arena, as they’ll once again host the San Diego Gulls. A win in regulation for Tucson will clinch the I-8 Border Cup Trophy for a fifth consecutive season. Friday’s season finale is scheduled for 7:00 p.m. MST, with coverage beginning at 6:45 p.m. MST on Fox Sports 1450AM with Roadrunners Warm-Up hosted by Jimmy Peebles. Then, “Voice of the Roadrunners” Adrian Denny will have all the action live from the Old Pueblo.