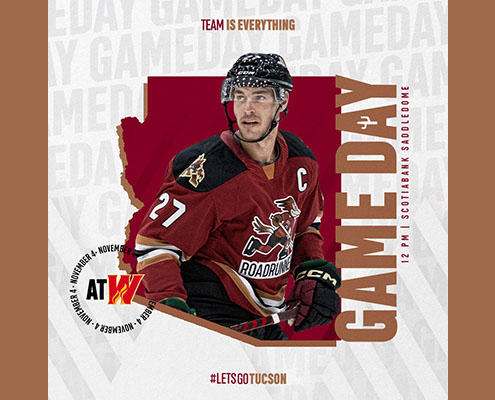 The Roadrunners wrap up their road trip and two-game set with the Calgary Wranglers Friday afternoon at the Scotiabank Saddledome in Calgary, Alberta. Tucson is looking for their sixth consecutive win and a perfect 4-0 road trip after taking the series opener on Wednesday 3-1. The Wranglers are seeking their first home win since moving to Calgary from Stockton, with an 0-3 record so far this season at the Saddledome.

Three Things
1) Tucson won the first-ever meeting with the Calgary Wranglers on Wednesday by a score of 3-1. Calgary came out hot with the first 10 shots on goal to outshoot the Roadrunners 30 to 9 through the first two periods. Tucson flipped the script in the third, however, recording all ten shots in the frame and scoring a pair of goals to break a 1-1 tie and secure the win. Ivan Prosvetov earned his fourth-straight victory to open the season, as he stopped 29 of 30 shots faced to match his best start to a campaign in his professional career (2020-2021). The Roadrunners have now won three consecutive meetings with the Calgary Flames AHL affiliate to start a season dating back to their former affiliate, the Stockton Heat.

2) The Roadrunners regular scorers found the stat sheet in Wednesday’s opener with the Wranglers, as three players extended their active point streaks to five games or more. Jean-Sebastien Dea put Tucson on the board with his fourth goal of the season, pushing his scoring streak to six games. Assisting on the goal was Ben McCartney for his third assist over his last two outings. Laurent Dauphin’s go-ahead goal in the third period gave him his team-leading fifth goal of the season, breaking the brief tie with Dea for the team lead. Cam Dineen and Mike Carcone registered assists on Dauphin’s power-play goal, extending their scoring streaks to five and six games, respectively. Entering Friday, Carcone is tied for second in the AHL for both assists (nine) and total points (12).

3) Following Friday’s game in Calgary, the Roadrunners will return home for six-straight matchups at the Tucson Arena, tied for the longest home stand of the season. They’ll take the ice six times in the span of ten days with two-game sets against the Coachella Valley Firebirds, Henderson Silver Knights, and San Jose Barracuda from Friday, November 11, to Sunday, November 20. Key dates among the six-game slate include Military Appreciation Night on Saturday, November 12, Kid’s Free Wednesday on November 16, and Hockey Fights Cancer on Saturday, November 19. For more information and to purchase tickets, visit TucsonRoadrunners.com/Fun.

“Steve is always positive and tries to give us energy. We know we’re not going to have our best game every night, but finding a way to win is huge in pro hockey.”

Roadrunners forward Laurent Dauphin on Head Coach Steve Potvin’s ability to rally the team in the locker room during tight games like Wednesday’s 3-1 win over the Wranglers.

Number to Know
0 – The number of shots allowed by the Roadrunners in Wednesday’s third period against the Calgary Wranglers. The feat marked the first time in team history that Tucson had held their opponent without a shot on goal through a full 20-minute period of play. The Roadrunners had previously held opponents to a single shot on goal in a period five times in the past, most recently on March 2, 2019, against Colorado. Tucson recorded all 10 shots on goal in the final frame of Wednesday’s win, scoring a pair of goals and securing their fifth-straight victory.

We’re Doing It Live
Today’s game will be broadcast live on AHLtv, as well as on the radio on FOX Sports 1450AM and the iHeartRadio app. Coverage will start at 11:45 a.m. with Roadrunners Warm-Up hosted by Jimmy Peebles, before “Voice of the Roadrunners” Adrian Denny has all the action from the Saddledome.