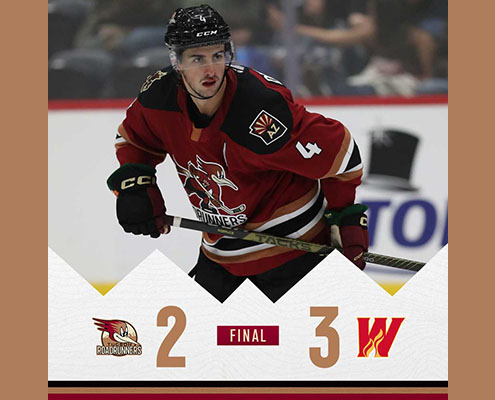 Calgary, Alberta – The Tucson Roadrunners wrapped up their four-game road trip Friday afternoon with a 3-2 loss to the Calgary Wranglers at the Scotiabank Saddledome, falling to 6-2-0-0 and snapping a five-game winning streak. The Roadrunners scored a pair of goals late in the contest to erase a 2-0 deficit, but the Wranglers retook the lead to earn their first home win of the season. Roadrunners goaltender Jon Gillies stopped 26 of 29 shots faced against his former organization, while Laurent Dauphin and Milos Kelemen established point streaks of two games with assists.

Roadrunners forward Nathan Smith scored his second goal of the season in the early goings of the third period to even the score between Tucson and the Calgary Wranglers at 2-2. The Roadrunners erased a 2-0 deficit in the span of 3:08, but the Wranglers came away with the victory by a count of 3-2.

Tucson forward Jan Jenik put the Roadrunners on the board late in the second period of Friday’s matchup with the Calgary Wranglers with the first of two Roadrunners goals in the span of 3:08 to erase a 2-0 deficit against the AHL affiliate of the Calgary Flames. The goal was Jenik’s first time lighting the lamp this season, as the 22-year-old is in his third season with Tucson after finishing in the top-three on the team for goals (17) assists (30) and total points (47) last year.

“We played hard today and we had chances, but it is what it is. We lost, but we’ll start another [winning] streak at home.”

Roadrunners forward Milos Kelemen on Friday’s series finale with the Calgary Wranglers that saw Tucson overcome a late 2-0 deficit but fall to the Wranglers by a final score of 3-2.

The Roadrunners and Wranglers were scoreless through the majority of the first period, before Calgary scored on their second man-advantage of the contest with 2:25 remaining in the opening frame. The goal gave the Wranglers their first lead of the series, a 1-0 advantage heading into the second intermission. Calgary extended their lead in the early goings of the middle period with their first even-strength goal of the series against Tucson, with Ben Jones lighting the lamp for the second time of the afternoon to make it 2-0. The Roadrunners got on the board with just 1:13 remaining in the second period, as Jan Jenik lit the lamp for the first time this season to cut the deficit to 2-1 entering the final frame of action. Adam Cracknell and Laurent Dauphin each recorded their third assists of the season on the goal, establishing a two-game point streak for Dauphin. Tucson carried the momentum of that into the third period, with a goal by Nathan Smith to even the score at 2-2 less than two minutes into the frame. Cameron Hebig and Milos Kelemen tallied assists on the equalizing goal, each their second of the year and Kelemen’s second point in as many games against the Wranglers (1g 1a). Both teams battled in the third, but Calgary’s second power-play strike of the contest broke the tie late in regulation, as the Wranglers came away with a 3-2 victory to snap Tucson’s five-game winning streak.