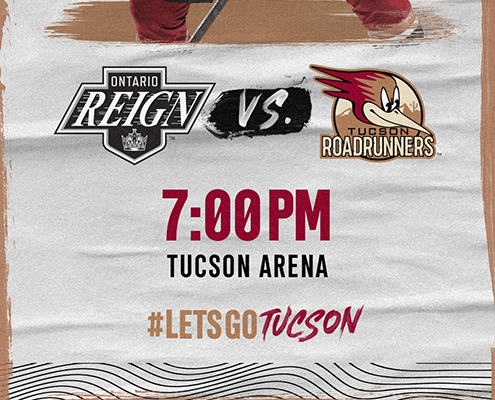 The Tucson Roadrunners return home to host the Ontario Reign for a pair of games at the Tucson Arena Friday and Saturday night. Tucson is coming off a two-game series with the Henderson Silver Knights in Las Vegas. The Roadrunners came close to splitting the pair of games with Henderson but fell in overtime last Saturday to come away with one point in the standings. They’ll be looking to hand the Reign their first regulation loss, as Ontario comes in on a 10-game point streak to open the season.

Three Things
1) The Roadrunners will have some familiar faces back in the building this weekend to help take down the Reign. The Arizona Coyotes assigned forward Ben McCartney and defenseman Victor Soderstrom to Tucson earlier this week. The 20-year-old McCartney is a week removed from his NHL debut last Friday night in Anaheim against the Ducks. He returns tied for the team lead in goals with four in as many games this season with the Roadrunners. Soderstrom returns to the Roadrunners for the first time this season, after recording 2-8-10 in 32 games with Tucson last season. The 20-year-old was drafted 11th overall by the Coyotes in the 2019 NHL Draft.

2) With the Ontario Reign coming to town, two current Roadrunners will have a chance to face-off against their former team for the first time. Forward Boko Imama and defenseman Cole Hults were acquired by the Arizona Coyotes from the Los Angeles Kings during the offseason. Imama tallied 14 points (9g 5a) in his fourth season with the Reign last season, while Hults recorded five points (1g 4a) in 19 games played in his rookie campaign with the Reign. Imama currently has two assists in six games this season and leads the team in penalty minutes with 23.

3) Tucson will look to score early and often against the red-hot Ontario Reign this weekend, as the Roadrunners are 3-1 when striking first, including each of their home wins. In addition, the Roadrunners have never lost when leading after the first period and are undefeated at home when leading after the second period as well. The Roadrunners have had a player score a hat trick in each of their first weekends at home as well, with Ben McCartney and Hudson Fasching accomplishing the feat on back-to-back Saturday nights in the Old Pueblo.

What’s The Word?
Tucson Roadrunners forward Travis Barron on the team’s points of emphasis heading into the weekend series with Ontario:

“All the important things are there for us. It’s just attention to detail, the little things we can do within the game that can help us be more successful. I think our work ethic is great and we just keep pushing each other every day, especially with these long practice weeks.”

Numbers to Know
3-2-3 – The price of a hot dog, soft drink, and draft beer at Friday night’s Tucson Roadrunners game. Friday’s game is the first of four 3-2-3 nights this season at the Tucson Arena, with the next coming on Friday, December 10, when the Roadrunners take on the Stockton Heat. Friday’s $3 draft beers are just a teaser for Saturday’s Hockey and Hops event prior to the Roadrunners Military Appreciation Night. More information on Hockey and Hops can be found HERE.