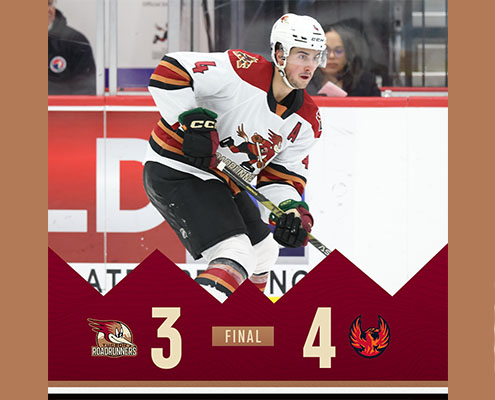 Tucson, Arizona – The Tucson Roadrunners faced off with the Coachella Valley Firebirds Wednesday night to wrap up a four-game home stand at the Tucson Arena. The AHL affiliate of the Seattle Kraken recorded a three-goal third period to come away with a 4-3 victory, splitting the series with Tucson after the Roadrunners won the series opener 7-2 Tuesday night. Goaltender Jon Gillies made the start in net for the Roadrunners and recorded 25 saves, while forward Ryan McGregor earned his first multiple-point night of the season. Tucson falls to 11-8-4-0 on the year and will head out on the road for three games in four nights in California with a contest against the San Diego Gulls Saturday, December 17, followed by another two-game set with Coachella Valley Sunday and Tuesday.

Tucson Roadrunners forward Mike Carcone followed up his four-point performance (3g 1a) in the series opener against the Firebirds with his second fight of the season on Wednesday night. Carcone dropped the gloves with Coachella Valley’s Peetro Seppala in the final 54 seconds of the middle frame. The 26-year-old entered Wednesday’s series finale in second place in the American Hockey League for total scoring with 11 goals and 20 assists.

ONE MORE ON THE MAN-ADVANTAGE – The Roadrunners tallied their sixth power-play goal of the series in the first period of Wednesday’s rematch with the Firebirds, scored by forward Ryan McGregor. Tucson’s six goals while on the man-advantage represents a new season high for a two-game series, after the Roadrunners set a franchise record with five power-play strikes in Tuesday’s 7-2 victory. Tucson ended the four-game home stand firmly in second place in the AHL’s Pacific Division for home power-play percentage at 23.9%.

Forward Ben McCartney netted his fifth goal on the season in the second period of Wednesday’s matchup between the Roadrunners and Coachella Valley. The goal was the only score of the middle frame, as McCartney established a goal streak of two games over the midweek set against the Firebirds. J.S. Dea earned his tenth assist of the season on the goal and McCartney’s linemate Curtis Douglas recorded his first point as a Roadrunner with the secondary assist.

“I thought we did some good stuff and started off pretty well. It was a bit of a weird game, [there were] a lot of power-plays and penalty-kills. We played pretty well five-on-five for the most part, too.”

Roadrunners forward Ryan McGregor on Wednesday’s series finale with the Coachella Valley Firebirds. McGregor tallied his first multiple-point performance of the season with a goal and an assist in the opening period.

After falling behind 2-0 in the series opener, the Roadrunners wasted no time getting on the board in Wednesday’s rematch with a goal by Travis Barron just 2:19 into the first period. The goal was Barron’s fifth of the season to match his total number of fights on the year, which included a bout in the third period of Tuesday’s opener against Coachella Valley’s Tye Kartye. Coachella Valley snapped Tucson’s streak of eight unanswered goals in the series with 12:05 left in the period to even the score at 1-1. The goal was Coachella Valley’s first power-play strike of the midweek set, coming on the first trip to the man-advantage for either team on the night. The Roadrunners retook the lead with a power-play goal of their own in the final 1:39 of the opening frame, scored by Ryan McGregor for Tucson’s sixth power-play score of the series and a 2-1 lead entering the first intermission. McGregor had notched his first multi-point effort of the season through the opening 20 minutes with a goal and an assist on Barron’s score. After a three-goal first period, the middle frame of action was scoreless for 17:22 as Tucson held onto a 2-1 advantage. Ben McCartney snapped the longest scoreless streak of the series at 19:01 with his second goal in as many nights and fifth goal on the year. The middle 20 minutes of play was capped off by a fight between Mike Carcone and Coachella Valley’s Peetro Seppala. McCartney’s tally was the only score of the second period, but the Firebirds came out of the intermission with a goal 13 seconds into the third period to cut the Roadrunners lead down to 3-2. Coachella Valley added on less than six minutes later with the equalizer goal, ending Tucson’s stretch of 27:42 with the lead. With the score knotted at 3-3, the Firebirds netted their third consecutive goal with 4:41 remaining in regulation to take their first lead of the night at 4-3. The Roadrunners were awarded a six-on-four situation with nine seconds left after a delay of game penalty and a pulled goaltender but were unable to score in time as they split the midweek set with Coachella Valley.

1-On-1 With Curtis Douglas
Scroll to top