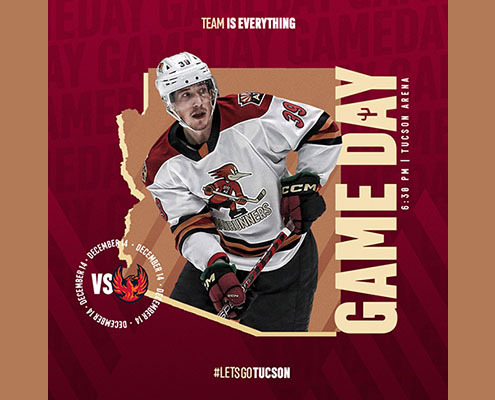 The 11-7-4-0 Tucson Roadrunners close out their four-game home stand Wednesday night with the second of two games against the Coachella Valley Firebirds after a dominant 7-2 win in the series opener Tuesday. The contest marks the final meeting between the Roadrunners and Firebirds at the Tucson Arena this year, with four upcoming matchups that will take place in Coachella Valley. The series finale with the AHL affiliate of the Seattle Kraken is the Roadrunners second Kids Free Wednesday of the season, with all kids 12 and under receiving a free ticket with a paying adult at the Tucson Arena Box Office.

Three Things
1) The Roadrunners took the series opener over the Firebirds by a score of 7-2, highlighted by forward Mike Carcone’s fourth career AHL hat trick and fourth in 104 games since joining Tucson in 2021. Carcone gave Tucson their first lead of the night around the midway point of the second period with a five-on-three score, before netting an even-strength goal and another power-play strike in the third period to complete the hat trick. Tucson also held Coachella Valley to just 17 shots on goal, which represents both the Roadrunners fewest shots allowed in a game this year and the Firebirds fewest shots for on the season. The Roadrunners previous season-low for shots allowed was also against the Firebirds on Saturday, November 12, with 18 shots on netminder Jon Gillies.

2) Tucson’s special-teams units combined for a historic performance on Tuesday against the Firebirds, as the Roadrunners netted a franchise-record five power-play goals. The previous mark of four power-play goals had not been done since November 18, 2016, against the Manitoba Moose. With the performance, Tucson’s power-play jumped to second place in the AHL’s Pacific Division while at home. On the other end, the Roadrunners penalty-kill went a perfect four-for-four against a Firebirds man-advantage that ranks second in the Division at 23.6 percent.

3) With their 7-2 win over Coachella Valley on Tuesday, the Roadrunners have now won against all seven opponents they’ve faced this year, with an even or better point percentage against each. Tucson handed the Firebirds their fifth regulation loss of the season and are now tied with the Henderson Silver Knights for the longest active point streak in the Pacific Division. With just 20 games played in their inaugural season, Tuesday’s series opener was the largest loss in Coachella Valley’s brief franchise history and only their fourth multi-goal loss on the year.

“I think that’s part of our identity. We’re getting to the point where we’re building that reputation. We want to play hard and compete every night, and our guys can take care of themselves.”

Head Coach Steve Potvin on the Roadrunners establishing themselves as a tough team to face on their home ice. Tucson has earned a point in eight of their 11 total home games this year for a record of 5-3-3.

Number to Know
7 – The number of unanswered goals by the Roadrunners in Tuesday’s series opener with Coachella Valley after falling behind 2-0 early in the first period. The performance was Tucson’s highest-scoring game this season, as well as their first contest with three multi-goal periods on the year. Their three-goal third frame was the seventh period of three or more goals scored by the Roadrunners this season. The fastest two goals were scored exactly one minute apart in the middle frame on consecutive five-on-three and five-on-four power-plays by Mike Carcone and Ben McCartney.

We’re Doing It Live
Tonight’s game will be broadcast live on AHLtv, as well as on the radio at FOX Sports 1450AM and the iHeartRadio app. Coverage will begin at 6:15 with Roadrunners Warm-Up hosted by Jimmy Peebles, before “Voice of the Roadrunners” Adrian Denny has all the action from the Tucson Arena.