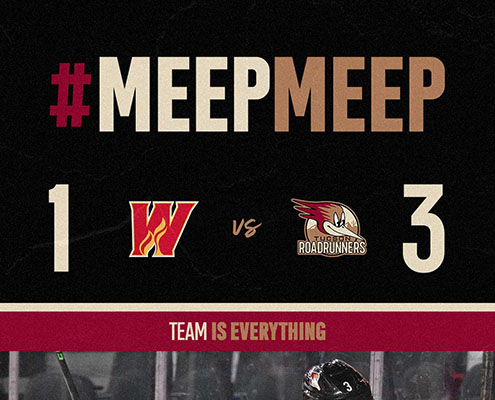 Calgary, Alberta – The Tucson Roadrunners took on the Calgary Wranglers Wednesday night at the Scotiabank Saddledome for the first meeting with the Calgary Flames AHL affiliate since they moved from Stockton. Tucson held on to win the series opener by a score of 3-1, as they kept their opponent without a shot in a period for the first time in team history in Wednesday’s third period. Goaltender Ivan Prosvetov earned the win for Tucson to match his best start to a season at 4-0-0, as he stopped 29 of 30 shots faced.

Roadrunners forward Laurent Dauphin scored what was the eventual game-winning goal in Wednesday’s 3-1 win over the Calgary Wranglers. The score was Dauphin’s team-leading fifth goal of the season and came with just 4:38 gone by in the third period to break the 1-1 tie. Assisting on the goal were defenseman Cam Dineen and Mike Carcone, pushing their active scoring streaks to five and six games apiece.

FLIPPING THE SCRIPT – After being outshot 30 to nine through the first two periods of Wednesday’s meeting with the Calgary Wranglers, the Roadrunners scored a pair of goals in the third while keeping the Wranglers from even recording a shot. The defensive effort marked the first time in team history that the Roadrunners held their opponent without a shot on goal in a period, after previously limiting teams to just one shot in a period five times. In addition, Tucson drew the final four power-plays after previously trailing five to one in trips to the man-advantage.

Tucson Roadrunners forwards Laurent Dauphin and Jean-Sebastien Dea scored the first two goals for Tucson in Wednesday’s 3-1 win over the Calgary Wranglers at the Saddledome. Dea’s goal put the Roadrunners up 1-0 in the first period, extended his active scoring streak to six games, and briefly tied him with Dauphin for the team lead in goals with four. Dauphin’s goal in the third period retook the lead for the Roadrunners and retook his team lead for goals with his fifth of the year.

“It was a good team effort. I told the boys in the locker room that I have their backs and they have mine, and that’s how good teams play. We have good coaching, good forwards, good defense, and good goaltending. The power-play paid off again, and that’s always good to see in front of me.”

Roadrunners goaltender Ivan Prosvetov on Wednesday’s 3-1 win over the Calgary Wranglers. Prosvetov stopped 29 of 30 shots faced for his fourth-straight win to open the season.

After facing an early barrage of shots on goal from the Wranglers, it was the Roadrunners that got on the board first with Jean-Sebastien Dea’s fourth goal of the season. The goal came with 12:31 gone by in the opening frame, with assists from third-year Roadrunners Ben McCartney and Cam Crotty. The score extended Dea’s point streak to six games and gave McCartney his third assist over his last two outings. The Wranglers answered back with a power-play goal in the final 35 seconds of the opening frame to even the score at 1-1 going into the first intermission. Tucson was outshot by Calgary 17 to three through the first 20 minutes of play, but each produced a single goal. The Wranglers earned the first three trips to the man-advantage to open the middle frame, but the Roadrunners penalty-kill unit and goaltender Ivan Prosvetov were able to keep Calgary from taking the lead. The 1-1 stalemate remained after the second period of play, as the Roadrunners faced less shots on goal while increasing their own total for the frame. After 25:03 of scoreless hockey, Tucson retook the lead in the third period with a power-play goal from Laurent Dauphin. The goal marked Dauphin’s team-leading fifth goal of the year, while assists from Cam Dineen and Mike Carcone extended their scoring streaks to five games and six games, respectively. The Roadrunners kept the Wranglers from recording a shot on goal through the third period, and a late empty-net strike by Milos Kelemen secured a 3-1 victory for Tucson’s fifth-straight win.

1-On-1 With Mike Carcone
Scroll to top