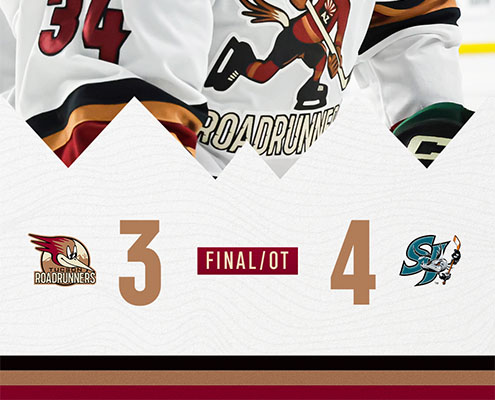 San Jose, California – The Tucson Roadrunners faced off with the San Jose Barracuda Sunday night for the final outing of their five-game road trip. The Roadrunners erased a late 3-2 deficit to force overtime, but the AHL affiliate of the San Jose Sharks netted the game winner for a 4-3 victory in the series finale from the Tech CU Arena. Adam Cracknell (1g 1a), Mike Carcone (1g 1a) and Cam Dineen (2a) all tallied multiple points for Tucson, while goaltender Ivan Prosvetov recorded 28 saves. The Roadrunners finish the five-game road trip with a 2-2-1-0 record and will return home for a four-game home stand at 10-7-2-0 overall on the season.

Roadrunners forward J.S. Dea opened the scoring in Sunday’s series finale against the Barracuda with his team-leading 11th goal of the season. With the score, Dea finished the five-game road trip with a goal in each contest, setting the longest goal streak by a Roadrunner since 2019 at five games and counting.

CLUTCH CRACKNELL – Tucson Roadrunners Captain Adam Cracknell netted the game-tying goal with 4:58 remaining in regulation of Sunday’s series finale with the San Jose Barracuda to send the contest to overtime. The goal gave Cracknell his second point of the game and fourth point overall (1g 3a) in the weekend series against San Jose. In his first year as a Roadrunner, the 37-year-old has 12 points (6g 6a) and has appeared in all 19 games this season.

Roadrunners defenseman Cam Dineen recorded his third multiple-point performance of the season on Sunday against San Jose, and his second multi-point outing over the last three games. The Alternate Captain tallied a pair of assists on goals from fellow Alternate Captain Mike Carcone and Team Captain Adam Cracknell. All three skaters notched multi-point nights against the Barracuda on Sunday.

“It was a close game. We tried our best to get two points and ended up with one, but we battled hard and played as a team.”

Roadrunners forward Laurent Dauphin on the team’s effort in Sunday’s series finale with San Jose. Tucson erased a late 3-2 deficit but fell in overtime by a score of 4-3.

Sunday’s series finale began with the Roadrunners scoring first for the fourth time on their five-game road trip, with a goal by forward J.S. Dea for his team-leading 11th of the season 7:34 into the contest. The score also gave Dea his fifth-straight outing with a goal, the longest streak by a Roadrunner this season. Like Saturday’s series opener, an early goal by Tucson was the only scoring of the first period, as they led 1-0 after the opening 20 minutes of play. The Roadrunners outshot the Barracuda 15 to four in the first frame and drew all three trips to the power-play. Tucson continued to lead 1-0 through the first half of the second period, but a power-play strike by Mike Carcone with 7:36 still to play in the middle frame extended the advantage to 2-0. After missing Saturday’s series opener, Carcone made up for lost time with his seventh goal and team-leading 23rd point of the season. San Jose quickly answered back with their first score of the contest 50 seconds later to reduce the Roadrunners lead back to 2-1. The Barracuda added another goal 3:58 later, this time on the power-play, to even the score at 2-2 late in the second period. With the score, Tucson and San Jose were tied for the first time since the opening 7:34 of the first period, and they would remain knotted at 2-2 entering the final period of play. The Barracuda took their first lead of the night at 3-2 with 3:31 gone by in the third period and just 15 seconds into a power-play. The goal was San Jose’s second of the game while on the man-advantage. With time winding down in regulation, the Roadrunners went on a power-play with a chance to tie the game at 3-3. Captain Adam Cracknell came through with his sixth goal on the season to even the score in the final 4:58 of the third period and send the series finale from San Jose to overtime. With 46 seconds remaining in the three-on-three overtime period, the Barracuda scored the game-winning goal to come away with a 4-3 victory. The Roadrunners will return home for a four-game home stand beginning Friday, December 9 at the Tucson Arena.

Tucson Roadrunners Road Ahead: Home For The Hockey
Scroll to top