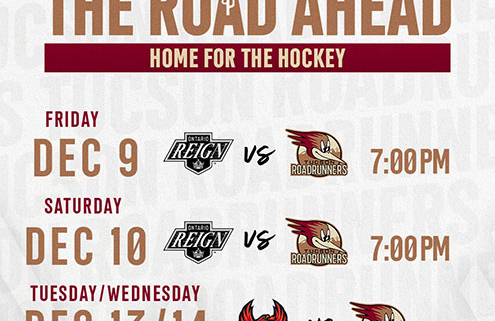 Tucson Roadrunners Road Ahead: Home For The Hockey

The Roadrunners return home for a four-game home stand at the Tucson Arena beginning Friday, December 9 against the Ontario Reign. Tucson and the Reign are neck-and-neck in the AHL’s Pacific Division standings at 10-7-2-0 and 11-6-0-1, respectively. Tucson and Ontario met twice on the Roadrunners recent five-game road trip, splitting a weekend series at the Toyota Arena. Following the two-game set with Ontario December 9 and 10, Tucson will welcome the Coachella Valley Firebirds into town once again for a pair of midweek matchups Tuesday, December 13 and Wednesday, December 14. The series marks the second of two trips to Tucson for the AHL affiliate of the Seattle Kraken, after a pair of games at the Tucson Arena to open the Roadrunners previous home stand on November 11 and 12.

Tucson’s weekend set with the Ontario Reign kicks off Friday night with a Roadrunners Holiday Ornament Giveaway for the first 1,000 fans, courtesy of Tucson International Airport. Fans can stick around after the game for a special screening of the Christmas movie Elf, before returning to the Tucson Arena the next night for the fan-favorite Teddy Bear Toss game. Both contests with the AHL affiliate of the Los Angeles Kings start at 7 p.m. MST, with tickets available for purchase at TucsonRoadrunners.com/Fun. In addition, select players will be at Tucson Holiday Ice on Church Avenue outside the Tucson Arena on Tuesday, December 6 from 6 p.m. to 7 p.m. to skate with patrons. Fans who bring a non-perishable food item will receive a free ticket to either the team’s December 13 or 14 matchups against Coachella Valley. On Thursday, December 8, the Roadrunners are teaming with the Boys & Girls Clubs of Tucson for a hockey workshop at the William J Dawson Memorial DEK Hockey Rink on 3151 East Grant Road. 100 local students will take part in the afternoon session that begins at 4 p.m. as Roadrunners players will share hockey instruction, sign autographs, and distribute holiday gifts. Finally, fans are invited to bring toys to series opener with Ontario on Friday, December 9, that will be delivered by Dusty to Diamond Children’s Medical Center the following Monday. For more information on upcoming community events and Tucson’s four-game home stand, click HERE.

The Roadrunners closed out the five-game road trip last weekend in San Jose, finishing the trip with a 2-2-1-0 record. Both wins were by multiple goals, and the Roadrunners scored first in four of the five total contests. Tucson backstops Jon Gillies and Ivan Prosvetov recorded at least 26 saves in each outing on the trip and combined for a .913 save percentage. The Roadrunners are tied for the third-best road point percentage in the AHL’s Pacific Division (.591) and will close out 2022 with five of their last seven games of the year away from the Tucson Arena.

Forward J.S. Dea scored a goal in all five games on Tucson’s road trip, becoming the first Roadrunner since 2019 to light the lamp in at least five-straight games and the fastest Tucson skater to ten goals since the 2019-2020 campaign. A goal by Dea in Friday’s series opener with Ontario would tie him for the Roadrunners franchise record of six consecutive appearances with a goal, which was last achieved by Lane Pederson in the 2019-2020 campaign. Dea currently leads the Roadrunners in goals with 11 and has found the back of the net in all six stops on the road for Tucson this year.

Mike Makes Up For Lost Time

Tucson leading scorer Mike Carcone returned to the lineup for Sunday’s series finale with the San Jose Barracuda after missing his first game of the season the night before. In his return, Carcone notched his eighth multiple-point performance of the season and his fourth in five outings against the Barracuda. The 26-year-old has 10 total points (4g 6a) against the Barracuda this year and enters the week on a four-game point streak dating back to the start of Tucson’s road trip.

Defenseman Cam Dineen recorded a pair of assists on power-play goals for the Roadrunners in their last game on Sunday, December 4 in San Jose. The 24-year-old leads Tucson defenseman with 11 points (1g 10a), with seven of those points coming on the man-advantage. Dineen tallied five assists in as many games on Tucson’s recent road trip and has reached ten assists on the season for the second-straight season. The current longest-tenured Roadrunner set career-highs last season for assists (16) and total points (19), while also appearing in his first 34 NHL contests for the Arizona Coyotes.

Newly acquired forward Curtis Douglas made his Roadrunners debut Saturday night at the Tech CU Arena against the San Jose Barracuda. The 22-year-old appeared in both games over the weekend, centering a forward line with Milos Kelemen and Cameron Hebig. Listed as six-foot-nine, Douglas became the tallest player in Roadrunners team history by three inches. Over his first weekend with Tucson, the 2018 Fourth Round Draft Pick recorded four shots on goal.

Tucson Roadrunners Happy Hour airs every Tuesday at 5 p.m. on FOX Sports 1450AM and the iHeartRadio app, with a podcast version also available after each episode on the iHeartRadio app. This week, co-hosts Adrian Denny, Brett Fera and Kim Cota-Robles will be joined by forward Cameron Hebig live from Tucson Holiday Ice outside the Tucson Arena. In addition, a new episode of the Tucson Roadrunners Insider Podcast released Sunday night after the Roadrunners series finale with the San Jose Barracuda. “Voice of the Roadrunners” Adrian Denny and TucsonRoadrunners.com’s Jimmy Peebles recapped the five-game road trip and looked ahead to Tucson’s upcoming four-game home stand and community events. The podcast can be found on the iHeartRadio App.

1-On-1 With Cam Hebig
Scroll to top