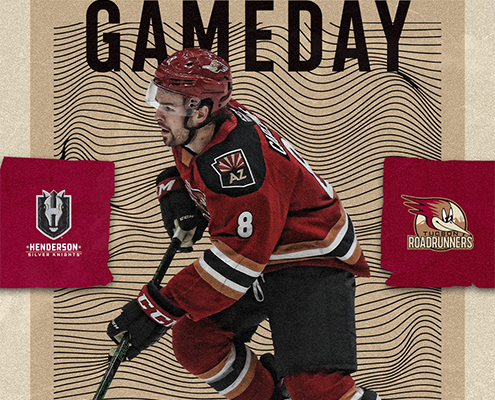 The Tucson Roadrunners open the 2021-22 AHL Preseason with their first of three matchups with the Henderson Silver Knights Wednesday evening. This is the only preseason game taking place in the Old Pueblo this year, with the team returning to the TCC ice for their Home Opener Saturday, October 23, when they’ll take on the Texas Stars.

Three Things
1) Head Coach Jay Varady will be behind the Roadrunners bench this season for the first time since March 2020, making his return from the Arizona Coyotes, where he spent last year as an assistant coach. Varady is looking to replicate the success of his previous season with Tucson, the 2019-20 Roadrunners squad that was named the Pacific Division Champions. In addition to the team’s success, Varady was named the Head Coach of the AHL Pacific Division All-Stars that year, as Tucson finished the season with a 36-19-1-2 record.

2) All three of the Roadrunners preseason contests will be against the Henderson Silver Knights. After Wednesday night’s tilt in Tucson, two more games are slated for October 10 and 11 at the Orleans Arena in Las Vegas. Tucson was one of the few teams to crack Henderson’s home-ice advantage last season, taking three of six possible points in the team’s first-ever trip to the state of Nevada last April.

3) Tucson will be opening the 2021-2022 Regular Season nine days after Wednesday’s preseason game, starting the season on the road against the Stockton Heat. The Roadrunners will be competing in the largest-ever Pacific Division, with nine teams vying for the title of Pacific Division Champions. Joining the Pacific this year are the newly formed Abbotsford Canucks, along with the Stockton Heat returning after spending the 2021 Season North of the border in the Canadian Division.

What’s The Word?
Tucson Roadrunners defenseman Dysin Mayo on being the last remaining player from the Roadrunners inaugural 2016-2017 season, and entering his sixth year with the organization:

“I still feel like a young guy, but on this team right now I’m the old guy. It’s nice to be back and stay in the same city year after year and have that familiarity. I’m really happy to be back.”

Number to Know
12 – The number of Roadrunners players from last season currently on the preseason roster. Among them are standout goaltender Ivan Prosvetov, veteran defenders Dysin Mayo and Cam Dineen, and promising young prospects Jan Jenik and Ty Emberson. In addition, forward Hudson Fasching will be returning to a prominent role on the Roadrunners roster after spending the majority of last season with the Arizona Coyotes Taxi Squad.

We’re Doing It Live
Wednesday’s game can be listened to live on Fox Sports 1450AM, or on the iHeartRadio app. Roadrunners Hockey makes its return to the radio beginning with Roadrunners Warm-Up at 6:15 p.m. MST, as Jimmy Peebles gets you ready for the game before “Voice of the Roadrunners” Adrian Denny has the call at 6:30 p.m.