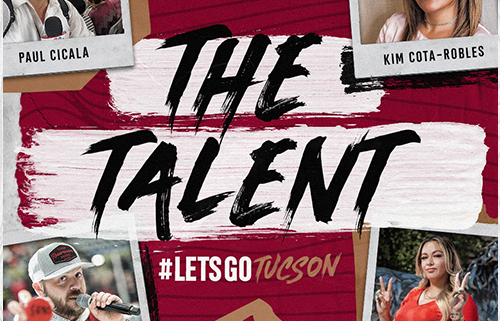 Tucson, Arizona – The Tucson Roadrunners, owned and operated by the Arizona Coyotes, announced today their Game Night Talent Roster for the 2021-2022 season that opens with a preseason contest against Henderson Wednesday at 6:30 p.m. from the Tucson Arena.

About Kim Cota-Robles
Kim Cota-Robles becomes the first female fulltime Public Address announcer in professional hockey. She is a fourth generation Tucson native and has a minor, completely inexplicable kiwi allergy. She’s a graduate of the University of Arizona, where she completed both her Bachelor of Fine Arts and her Master of Business Administration. She was an officer in the United States Navy for 11 years and her favorite duty station was Washington, DC (although she tells everyone Japan because it sounds more exciting). She only started her voice career several years ago but has been a hockey fan since before she saw Ron Hextall play against Dominik Hasek at Nassau Coliseum. She is a strong advocate of never wearing matching socks because life is much too short.

About Paul Cicala
Paul Cicala has been nominated for multiple Emmys in news and sports, and after a career that has taken him to Southern California, Las Vegas, Texas and Mexico, Paul is proud to be back in the area he was born and raised – Tucson. As a Sports Anchor for KVOA News 4 Tucson, Paul Cicala has won Regional Associated Press Awards for “Best Sports Reporting.” At KVOA, he has also been nominated for Emmys and took home first place as “Best Sportscaster” by readers of the “Tucson Weekly” and the Spanish-language magazine “Perfil Social” multiple years in a row.

About Beef Vegan
Entering his sixth season as the Roadrunners In-Game Host and the morning host at Tucson’s Rock Station 102.1 KFMA, Beef Vegan is a legend in the D.I.Y. Arts and Music scene here in Arizona. Beef has won multiple awards including Best Radio Personality, Best Morning Show, and had his station listed at one of the 10 bests in the nation by USA Today. (This gave him opportunities to host concerts, festivals, comedy shows, and weekly television.

About Yasmine Lopez
Yasmine Lopez is a first generation Mexican/American born and raised in Tucson. It was at Northern Arizona University where she found her passion for live television. Working on a production crew for Fox Sports Arizona on campus, it only took a simple “three, two, one, we’re live!” to fall in love with live sports. Although a morning editor at KOLD News 13, she has taken a role as an AZ Weekend Reporter and the host of “Taste This Tucson,” a segment that promotes the amazing food around the Old Pueblo.