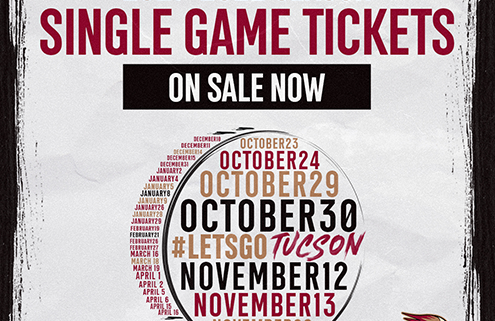 Tucson, Arizona – Single game tickets for all 34 regular season home games for the 2021-2022 season of Tucson Roadrunners Hockey are on sale now at TucsonRoadrunners.com/Games.

The Roadrunners regular season home opening weekend for their sixth season in the Old Pueblo is Saturday, October 23 at 7 p.m. and Sunday, October at 4 p.m. as the team will host Texas.

Opening Weekend opens a four-game October home stand for Tucson who will open defense of their I-8 Border Rival trophy when the host San Diego Friday, October 29 and Saturday, October 30 at 7 p.m. The Roadrunners will look to hold their season series trophy against San Diego for a fifth-straight season.

Once again the team’s rallying cheer will be #LetsGoTucson. The popular chant for Roadrunners fans inside Tucson Arena during home games is again being incorporated into all aspects of the team’s messaging as the organization’s rallying cheer to our community.

The team’s official hashtag is #LetsGoTucson and the official victory hashtag will be #MeepMeep.

The complete home schedule is below: